Should You Go to the Road Rally? 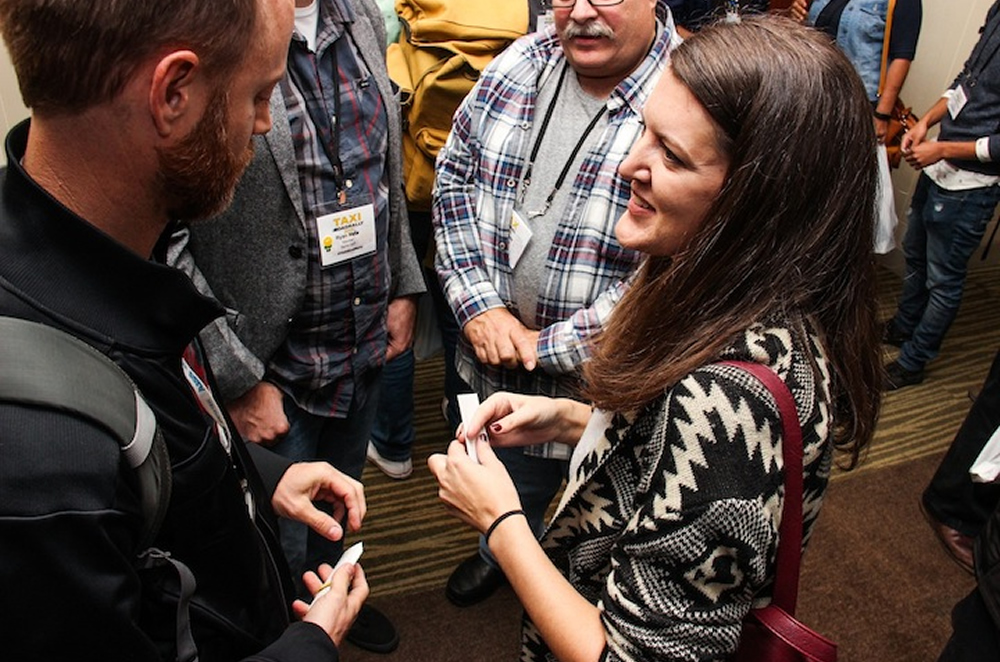 With TAXI’s free convention, the Road Rally coming up in little more than four months, it’s time to start making your plans. Should you go or not?

“Is it worth it?”
Yes, virtually every first-timer would tell you that by the end of his for her first Rally, they are kicking themselves and saying, “I can’t believe I haven’t been coming to this for years!”

“Will I learn anything?”
We’re working on this year’s panels, classes, and mentors, but you’ll get a great idea of how much incredible stuff is at the Rally if you look at last year’s event.

“Will I find it easy to ‘fit in,’ make friends, meet collaborators, and meet industry people? I’m a bit shy and afraid I’ll spend the entire weekend feeling intimidated and afraid to talk to anybody.”
Sometimes, a picture is worth a thousand words!

“Can I afford the plane ticket and hotel?”
Look at it this way. Your music is your business.

If you were starting a pizza joint, how much would you expect to invest in the start-up? Whatever you spend on airfare (if needed) and hotel will be a tiny drop in the bucket compared to what you’d spend starting a simple pizza place. You’d spend more on a new guitar or fancy outboard gear, wouldn’t you?

Why would you skimp on an event that virtually everybody says is life changing?

“Can’t I just wait until I build a bigger catalog and go next year?”
Why put things off for another year? How many years have you been waiting to earn income with your music? Why spend the next year building a catalog, when chances are you’ll build a much more lucrative catalog with the right music after you’ve been to the Rally!

Read These Forum Posts, Typos and All!

I attended my first Road Rally in 2015. At the time I had a handful of licensing deals under my belt with about 5 companies, all attained through Taxi listings. I had absolutely no placements at that time. I was feeling both excited and discouraged.

I attended the Rally and took every bit of advice I could. A couple things really stuck with me though:

1) Stick to what you can do really well. Honestly, I had been trying to pitch to every listing I thought I could possibly get. But that wasn't working a lot of the time. So, after the Rally, I really dug in and just tackled the listings that I thought I could really connect with. Right away, I was getting way more forwards and much fewer returns.

2) Write often. Previously, I was sort of taking my time, maybe putting out one instrumental cue a week if I was lucky, and if I did a song with vocals it was a few weeks in the making. After the Rally, I really took this advice and started pumping out 2 or 3 cues per week (except for big orchestral cues, those I was still lucky to do 1 per week given I only have a couple hours each day to work).

3) Write, Submit, Forget, Repeat. Best advice ever. I don't allow myself to be tied to my cues emotionally. I write them, put them in my catalog, pitch them wherever they might fit, and then let them go. But I don't wait for anything. As soon as one cue is done, then next one begins.

Since that road rally, I've bumped my libraries from 5 to nearly 15, and I've written about 150 pieces of music. Best of all, of those 150, I think about 135 of them are already signed to libraries, many of them even done as work-for-hire.

And to top it off, I've gone from 0 placements to almost 100 now, and changed my ASCAP royalties from somewhere around $0 per quarter to over $1500 per quarter -- and they just keep growing.

Honestly, Taxi has really pushed me so far in such a short time, but the information and contacts I made via the Rally have been an enormous boost to my success. I can't wait for Rally 2017!
http://www.randonpurcellmedia.com

I just joined Taxi in late Dec. 2014 and have never been to the Road Rally. I'm thinking about going to the Nov. 2015 Road Rally. Music is my passion and the few months I have been watching Taxi TV, receiving valuable Taxi critiques, reading Taxi forums and Taxi articles., this music thing has really changed from a hobby to a lifetime goal to succeed in making some money with my music. If I didn't have a full time job, I would be writing, composing, and recording music all the time. It's addictive. And yeah, I could talk about music all day long if I could...

Is it true that the Road Rally can be a huge learning and networking tool? I have much to learn and I want to take advantage of all the tools Taxi has to offer.

Thanks in advance for the feedback.
Bill Kafka
https://soundcloud.com/bill-kafka

For me, everything started at the Rally. It is an amazing weekend of learning, networking, fun, rejuvenation.

If you want your best chance to be successful with taxi, there are three things to do

1). Write, submit, forget, repeat
2) be active on this forum and make connections with other members
3) attend the Rally

It's perhaps not the only way, but I truly believe to get the most out of your Taxi membership, follow the above steps.

Hope to see you at the Rally

i very much agree with Kayle.

I didn't go for the first few years of my membership. Maybe because it was so far away and costly to fly out of Toronto. At least it felt like it was.

Then I decided to really commit to myself. Last year 2014, I attended my first Road Rally with eyes wide open.

I met a lot of like minded members waiting in the registration line. Lots of great stories. A bunch of songwriters in the same venue.

I, being new to the Rally could have probably mingled a bit more but I was there to learn.

I wanted to get better.

There are so many classes filled with info on getting you to see things in way you might not have thought about before. Mind boggling

What I came home with was a ton of valuable information which I have put to good use this year.

In short it is an awesome experience.

I will be there this year

Four Months Will Fly By

The Rally will be here before you know it, so hold the date, check out plane tickets, and start reading everything you can about it now. Check out all the posts about the Road Rally here!

We hope to see you in November!

Getting Comfortable With Production
Read the article

Should You Go To The Road Rally?
Read the article