If You’re Ever Having a Bad Day...

Lydia Ashton is a successful TAXI member who like many of our members, is part of an extended “family” of songwriters, composers, and artists who live all over the world. Lydia sent me the letter below, a few days ago. I was so moved by it, that I asked her if I could share it with our staff, and then our entire community. She said, “Yes.”

If you’re not moved by what you read below, you may not have a pulse ;-) Please take five minutes to read this, and know that your life will be a little richer by the time you’re done. Miracles happen!

I hope all is well with you and yours. This is a long email, so grab a cup of coffee and make yourself comfortable.

Every year around this time I share what I call "Gwenevere's story" on FB. I have done that since 2008 when we lost her in a drowning accident but she was miraculously given back to us. Every year I also look for a friend to share it with that I am not connected with on FB. This year I want to share it with you. I know I have told you about this in the past, but never in detail.

Partly I share this for my own sake, so that I may stay thankful and never forget the miracle we were given. Partly I share it hoping it may bring hope to those going through hard times, and serve as a reminder to us all that there is light and good in this world.

The 29th of April, 2008, our daughter Gwenevere was in a drowning accident. Every year around this time I share her story, and every year when I do, the emotions I felt watching her lifeless body in [my husband] Nathan's arms, before the police and firemen arrived, come back. The emotions that came when it hit me that I was looking at my daughter, and as far as I could tell she had already left this earth.

I have friends who have lost their children, and my heart breaks for them because I remember the pain I felt when I thought Gwenevere was lost. And still I know I will never fully understand the sorrow they carry. Because, in the end, I am also reminded of the indescribable joy and thankfulness I felt when realizing she survived.

We don't know how many minutes she was under water, but we know that when we found her she was blue and purple, and had no pulse.

The pool had no cover. If it had it would most likely have wrapped around her when she fell in and would have made it hard to get her out. She was floating close to the edge, so Mikaela saw her and was able to grab her and hold her head up out of the water. Mikaela did not fall in when she held Gwenevere out of the water. Mikaela was only six years old and could not swim, and the pool was deep. They both could have drowned.

Our son Karl immediately screamed for help. Two policemen were in the neighborhood and they broke through our back fence only 90 seconds after I called 911. Another police officer, who knew infant CPR, was at the corner gas station. He got there about one minute later. The ambulance and firemen were not far behind.

They were able to get her heart started with a faint, irregular pulse, and rushed her to the hospital. There they told us to say “goodbye” to her, and then they life flighted her to a different hospital that was better equipped to help her.

Gwenevere and the firefighters who helped save her. This shot was taken about two months after that fateful day.

About five hours after the accident they let us into the room to see her. She looked so tiny in the large hospital bed, surrounded by tubes, IVs, and monitors. She was in a medical coma, as they hoped to keep her brain from swelling. They told us she had multiple seizures, which usually means the brain is shutting down. She was given 50% chance of survival, and only 5% chance of surviving without brain damage. It was likely she would not recognize us if she ever woke up.

Then they told us to go home. They had done what they could for her, and now it was up to her whether she would survive or not. We went home to be with Mikaela and Karl. They were so young, only six and four years old. They thought they had watched their sister die.

We emailed and called everyone we could think of and asked them to pray.

The next morning the doctor called. They had measured her brain activity and things looked promising. He had taken her off the medication which kept her in a coma to see if she would wake up. When we arrived at the hospital, Gwenevere was awake. They had restrained her since she was trying to pull out the IVs.

When we entered the room she whispered "Help me, Mama!" Such beautiful words! Not only was she awake, she recognized us.

The doctors and nurses had told us that if she ever woke up it would be a long road to recovery.

The accident happened on a Tuesday evening. The next three days she recovered miraculously, and she was sent home that Friday.

The first day, the Xrays showed severe lung damage. By Friday, the Xrays looked normal. They had several experts come and examine her, and they all said the same thing; we had been given a miracle.

They saw no reason to keep her at the hospital as she seemed fully recovered. (She did stay on antibiotics for a couple of weeks, and had some follow-ups in the months after to make sure she was indeed recovered.)

I am so thankful for everyone who helped us both during the four days she was in the hospital, and also the months afterward as we dealt with this emotionally. 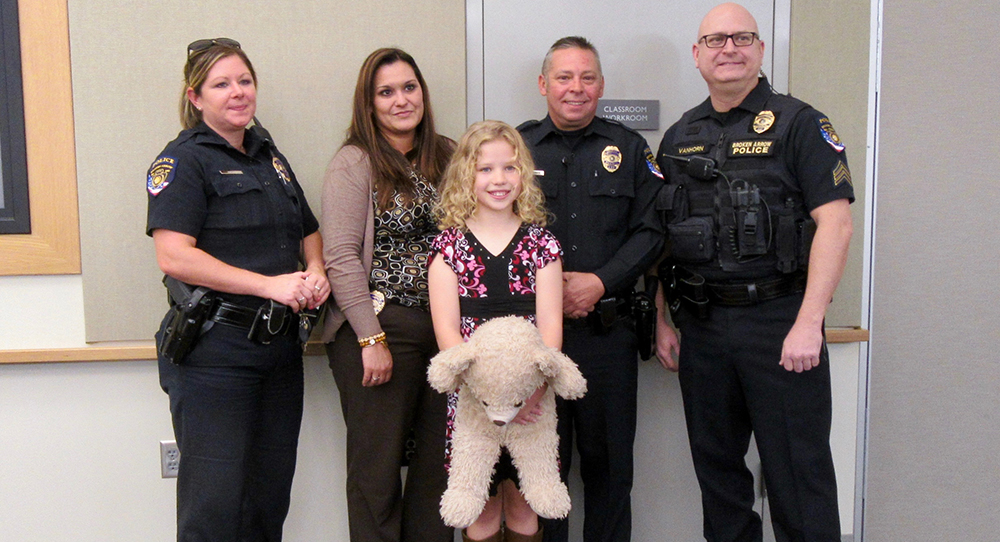 Gwenevere and the police offers who helped save her. This shot was taken in 2015, and Gwenevere brought the bear that one of the officers brought her while she was recovering in the hospital.

Firemen and police officers who came and helped so quickly, doctors and nurses who cared for her, people from all over the world who prayed, our church family who cleaned our house and kept us company at the hospital so we would never be alone, my sister and her family who drove us to the hospital, our neighbors who took care of Mikaela and Karl, family who flew in from Sweden, family and friends who supported us in person as well as form afar, even strangers who reached out to support us with prayers and well wishes... I am truly thankful to them all!

For many years I struggled with survivor's guilt. (If that is what it is called when you are the parent, and not the one who was in the accident.) Why did our daughter survive when others don't? I do not know the answer. But, I do know one thing... We were given a miracle, and for that I am forever thankful. Gwenevere is still with us!

I have recently seen the trailer for the movie Breakthrough. As I watched it, everything came back. I sat there crying, shaking, thinking that it is as if they made a movie about our story. Even the comment the pastor says in the film is similar to something our pastor told us as well. He said that God would heal Gwenevere, we just did not know if it would happen here on earth or once she reached heaven, but that our church family would stand with us through it all no matter how long.

Life is so unpredictable. It can change in an instant. Tell people that you love them, that you care. Call that friend or relative you haven't spoken to in a while, even if you don't really know what to talk about. Tomorrow is not promised. Treasure this day, this moment.

Michael, thank you for being part of my life! 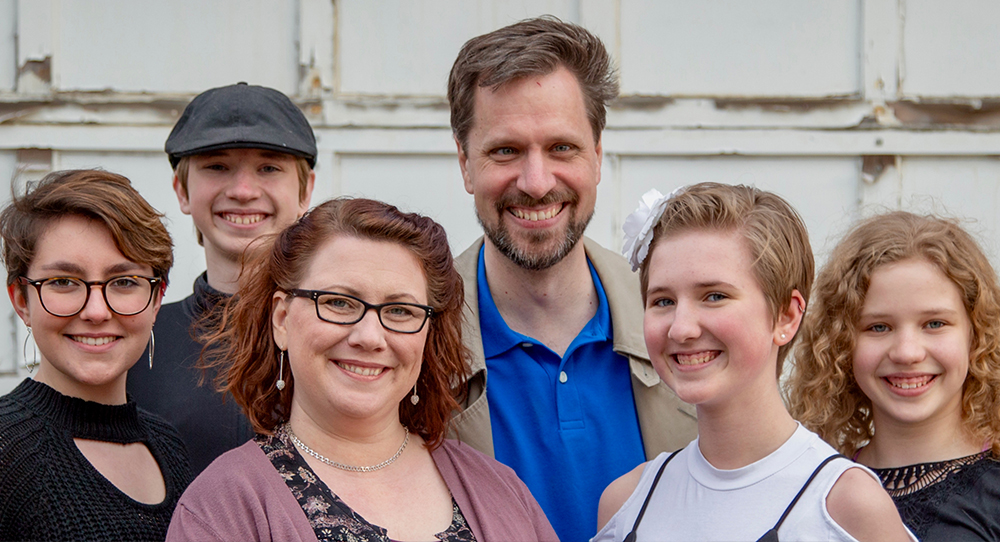 Some exciting news: We have taken in a foster child. Her name is Em and she is 17-years-old. So, now we have four teenagers in the house!

We have started the process to adopt her, and hope to do that before she turns 18 in the fall. We can still adopt her after that, but it would be a little more complicated. And, more than that, she longs for a forever family where she belongs - so we want to give her that as soon as possible.

Otherwise things are pretty much as usual. Nathan still works with audio for media, and next week he starts a new job where he will work in the media department at a University four days a week.

Mikaela is 17 and will be a senior next year. So will our foster daughter, Em. We will have two kids heading to college at the same time!!! Mikaela wants to be an author and will study English. Em wants to work in law enforcement. Karl is 15. He loves art and spends most evenings doing digital art on the computer. Gwenevere is 13 and lives for gymnastics. She is also brilliant in her academics and has her eyes set on Cornell University.

I recently upgraded my studio and at the same time switched from Digital Performer to Cubase. Huge change, but I love it. Definitely the right decision for me. I am writing for a couple of libraries, but most of my time goes to my children. That said, I do have some new numbers to share...

I can still trace back almost every single one of these to a TAXI connection. I can never thank you enough for what TAXI has done for me.

I will try to take some time soon to send in some placements and numbers to TAXI Success Stories.

I am hoping to make it to the Rally this year. I missed all the amazing people and panels / classes the last two years. And, I still regret not finding you and saying Hi in 2016 when I came to the Rally last time.

If You're Ever Having A Bad Day...
Read the article