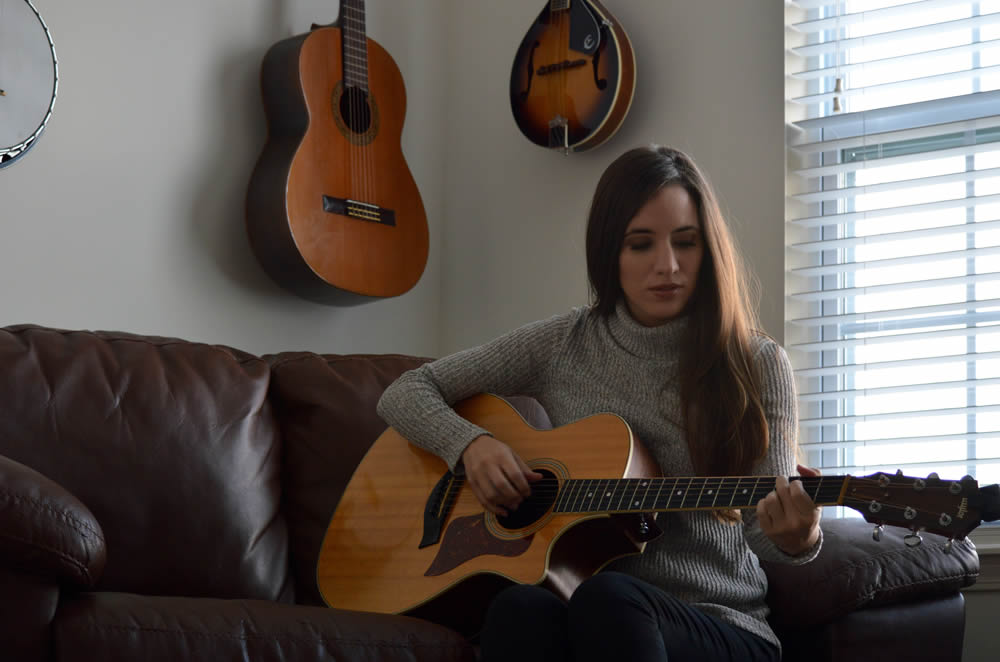 Talk to me about collaborations – how long have you been doing them?
My first in-person, face-to-face collaborations were with my friend and mentor, Alby Odum, when I was a teenager. We wrote several songs together that he submitted to TAXI and they got signed as a result. There were a few years where I didn’t do any writing, and then I started doing remote collaborations online when I became a TAXI member, myself.

How do you choose you collaborators?
Who I work with has happened very naturally through personal relationships. I connected with my first TAXI member friend on social media. I wrote to him and asked if he would ever want to work together on one of my song ideas. We completed a song, shared it online, and another TAXI member heard the song. He called my collaborator, asked about the song, my work ethic, etc. and then asked if I would collaborate with him. We wrote and recorded a song and then he introduced me to a lot of people at my first TAXI Road Rally and I just started working with people I knew from there. I think that’s why it’s so beneficial to become part of a community of people. I want to trust the people I work with and know that they take it seriously. I also want to know they understand the business side of things, and TAXI members tend to have an advantage in their education of the business if they use the resources like TAXI TV, the TAXI Forums, and TAXI’s convention. People I’ve worked with have referred me to new people as well.

"Sometimes you hurt yourself by trying to branch out in too many different directions, and then you lose focus and quality."

What percentage of the collaborations work out… in other words, how many make it all the way to a completed song?
Almost all of them. I can only think of two songs in three years that were never completed. I consider every song part of my job, so it really doesn’t enter my mind to not finish a song. It is more of a challenge to complete my own solo songs because there’s less accountability there. Completing your own songs is a really important discipline to have as a writer!

At our convention, the TAXI Road Rally, you mentioned your current project with fellow TAXI member Nathan Nasby. How did the two of you meet, and how did you land on the idea of collaborating?
We had heard each other’s music because we’re both involved in the TAXI community. We’ve collaborated with some of the same people. He had asked me if I would do some vocals for a song he was working on for a TAXI listing. I did, and then we met for the first time in person at Rally in 2015. We chatted over a meal and said it would be fun to collaborate some day but we were both pretty busy. It was months later before we tried another collaboration for a TAXI listing. We wrote so quickly and easily together, despite working remotely, that we tried another. After the second collaboration went just as quickly, we started chatting about doing a five song EP that we could pitch to a music library. As we worked on that, we kept having so much fun working together and we kept writing well past the five-song mark. Our families were both so excited about the music. It was then that we realized we had a distinct sound, and we both actually loved the idea of being artists— so South and Royal was born. (The name is a nod to our geographic locations since I’m in the USA and he is in Canada.)

What’s your ultimate goal for South and Royal?
It’s kind of funny to be asked that question at a point where my head is still spinning at how much has unfolded in a matter of a few months, but the ultimate goal for both of us is to provide a good living for our families while doing something we love! We have very specific career goals as a duo as well. A next-step goal for us is to get our songs licensed for TV and films, and we’re excited about the possibilities we have largely thanks to relationships and opportunities we’ve gained through TAXI. And I’m not just saying that because this interview is for the TAXI newsletter. I would say that anywhere!

Well thanks! I appreciate you mentioning it because there are still a lot of musicians out there who think TAXI is just about the pitching aspect.

"It took me a while to recognize that my instrumentals weren’t working because they were way too complex. They had too much going on for dialogue to fit in a scene, and they weren’t specific enough in setting one mood."

Shifting gears a bit: It seems like you’ve learned quite a bit about home recording and production since joining TAXI. I’m a huge fan of that because it frees musicians from the “prison” of limitations caused by not being able to bring what’s in their head and heart to fruition. At what point did you realize you needed to start learning your way around your home studio?
As soon as I decided I would become a TAXI member. I read through the listings before becoming a member and I knew that to make it in film and TV music, it would be wise to have a constant workflow and produce a substantial volume of songs that could create income over time. There’s no way I could do that by hiring someone to produce for me, so I invested in some basic recording equipment shortly before becoming a member.

Is it just learning knobs and clicking buttons, or is it equally learning to play a broader range of instruments?
Everyone’s journey, genre and goals vary, but I think it definitely helps in film and TV to play a broad range of instruments, or at least be versatile enough on one instrument to create a variety of styles and sounds, including virtual instruments. Diversifying with excellence is another way I’d say it. Sometimes you hurt yourself by trying to branch out in too many different directions, and then you lose focus and quality. There is, of course, the knobs and buttons element to it as well, and that’s important.

What prompted you to learn how to do it?
At first, I was just fascinated with the process! I learned from watching people work and I found a really great group of friends that encouraged me to learn. I wanted to have creative control of my career, and I didn’t like the idea of having someone else determine how my songs would sound. Plus, I didn’t have the money to constantly pay someone to do it for me and I wanted to be able to make changes down the road if necessary. So, I worked and saved for a long time to buy an iMac, Pro Tools, an inexpensive mic, and I picked up where I had left off from those years in high school when I recorded an album with my friends, Alby, Zito and Matt, who all had a hand in the production. I loved staying at the studio after we tracked parts and watching what they did. They would explain what they were doing, for my sake. They were really great, and included me in the process when they were deciding how to mix something. I owe a great deal to them for helping me feel like I could do this. Years later I was able to use a really amazing, but largely unused studio at the small college I attended. I also had a couple of friends and a basic music class that refreshed my memory on recording. Later, when I finally had my own DAW, my instructors became YouTube (mostly for trouble shooting), TAXI TV, the TAXI Forums, and the TAXI members and mentors I met at the Road Rally. There are a lot of incredible people within the TAXI community that have helped me so much.

"One major lesson we have learned from TAXI has been how to balance that fine line between creative license and giving the industry what it needs."

Are there any particular challenges that arise with the engineering side of things?
Time. I’ve never had a formal education in audio engineering, and I know there are weird gaps in my knowledge. For instance, I can hold my own in a conversation about parallel compression, subtractive EQ, or side-chaining, but sometimes I need to know simple, more basic things like how to mark where the chorus is in a session. If I’ve got a deadline and just need to get things done, I’ll troubleshoot and learn just enough to keep the project rolling. But I’d really love to spend more time learning each step in its proper order. One of my favorite resources is MacProVideos, but making the time to watch is tricky. There have also been times when having extra money [for a piece of gear or plugin] was an issue, but I’ve never allowed myself to view that as an excuse not to make this work. It just meant I had to be a little more patient.

Have you found that you’re making a lot more music now that you’ve let yourself out of out the “I-can’t-record-my-own-stuff prison”?
Definitely. And not only am I writing more, but I’m more apt to complete everything I start because I can now record them, versus leaving the ideas on a voice memo or notebook somewhere.

Has it opened more collaborative doors for you because you have the technical ability to trade files with your collaborators and record the parts needed to move songs or instrumentals forward?
Absolutely! That’s really the only way I am able to collaborate. I don’t live anywhere close to the people I’ve worked with. I love that having technical ability has allowed me to work with people anywhere in the world.

Don’t miss the final part of this interview in the January TAXI Transmitter!