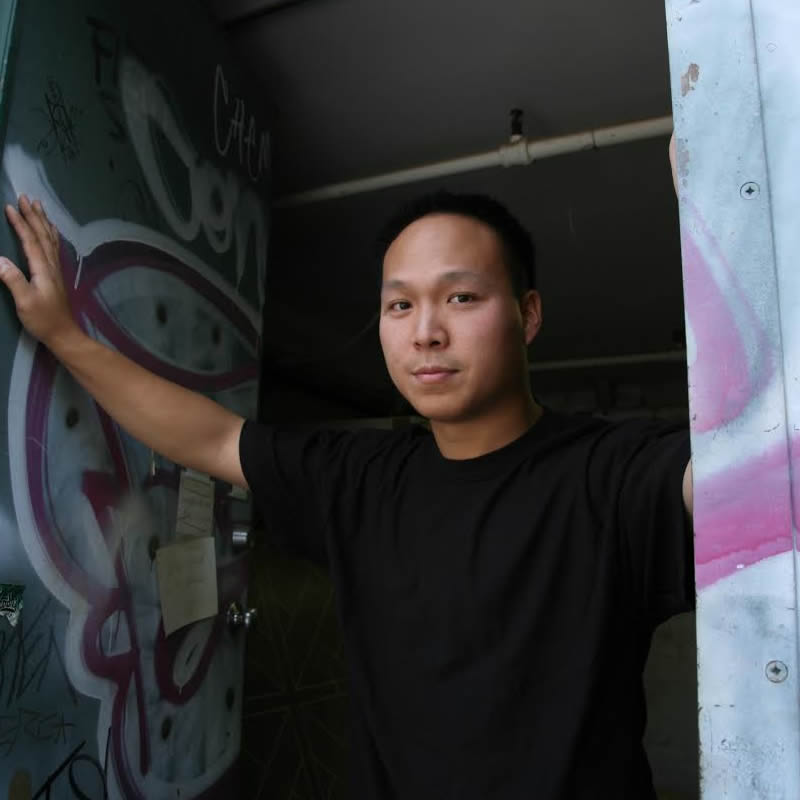 One of the things that’s pretty prevalent in a lot of Hip-Hop is the cultural stuff behind much of it: dealing dope, being a “kingpin” of sorts, trying to survive on the streets, dealing with the loss of friends (often from gang warfare), and a strongly misogynistic attitude. I know you a little bit, and I don’t see any of those things present in you personally or your music. As a matter of fact, your music isn’t negative… you can tell that just by looking at the titles! Is it hard to create Hip-Hop that sounds authentic without incorporating those elements and the cultural influences behind it?
I understand how it can appear that [the negativity] is part and parcel with the music when you aren’t exposed to the positive music that doesn’t get nearly as much mainstream exposure.

"Finding interesting and creative, sometimes funny ways to write about topics, even negative subjects such as violence, drugs, and misogyny is like an actor bringing those aspects to life as a character in a movie."
-Owen Chaim

But you’re right, I don’t have anything to do with any of that negativity you find in a lot of popular Hip-Hop. The thing about authentic Hip-Hop is it doesn’t have anything to do with whether it’s negative or positive. It’s about how the artist sees his environment, his place in it, and where he wants to go from there, if anywhere. Further, it’s also how your experience and environment get translated into lyrics using metaphors and similes while sculpting lyrics where the emphasis of words fall with a rhythm that sounds natural. Traditionally, within the Hip-Hop culture, it’s that skill that sets you apart as an authentic artist or rapper. So writing Hip-Hop that sounds authentic but isn’t overtly negative isn’t difficult so long as you approach the topic with this songwriting approach.

But you’re also wrong [about that observation]. I’ve written several songs that are downright irreverent with references to violence, drugs, and misogyny. I wrote them because they were requested [by a publisher] and because I thought I had listened to the reference artists enough to write in their voice. One example is a request I received from a publisher for a 2 Live Crew style song, who are known for sexually explicit lyrics. If I don’t write a song that has overt sexual references, but without cursing, it’s not going to be pitched. Another example was a request for a Cypress Hill style track (who have songs called, “How I Could Just Kill a Man,” and “Hand On The Pump,” (pump meaning the shotgun pump). If I don’t deliver a song that talks about violence from the first person, that song won’t be pitched either.

"Writing music to a request is more productive than finding a request that matches your music."
-Owen Chaim

I would never have written or released these songs as an artist, but since it’s for [film or TV] licensing, I’m open to writing about pretty much anything, even if it’s not something I support or condone, personally. I’ve really separated myself that much from the music I write, that I’m able to do that and still enjoy it. Another thing I’ve learned about myself is that I don’t enjoy the styles I write in, as much as I enjoy the songwriting process. So finding interesting and creative, sometimes, funny ways to write about topics, even negative subjects such as violence, drugs and misogyny is like an actor bringing those aspects to life as a character in a movie. It’s just an immersive kind of imagination I have when it comes to songwriting.

I was listening to a bunch of your music on your TAXI hosting page, and something jumped out at me: some of the tracks had an almost cinematic sheen to them, where others sounded drier, more in your face, and edgier. Do you start a piece, then see where it’s going and make a decision as to what types of scenes or shows it might be best for, then write, record, and mix accordingly?
I rarely write a piece of music without having an idea of where it’s going to be pitched anymore. It’s largely due to writing for TAXI listings as well as understanding that writing music to a request is more productive than finding a request that matches your music.

"I find that really inspired but simple ideas get used much more than the busy ones."
-Owen Chaim

What’s your writing process like?
It’s usually the music first. I find a melodic idea either on its own or after I find a chord progression that feels right for the reference artists or genre. I actually find melody ideas easier when I hum along to a chord progression so I don’t have to worry about hitting the wrong note on the keyboard. Then I build it up with supporting instruments. The drums usually come last, because I feel like the drums are best programmed to support the music.

If it’s just an instrumental cue, I’ll keep building alternate melodies, harmonies, and rhythmic accents until it sounds like a huge busy mess and copy paste until I reach 90 seconds or 2 minutes. Then I start peeling back the layers and let it build up by adding and subtracting the layers. I think the part where I’m building that busy mess is important for me because it helps me stay in the moment. If I were to stop at the main melody, chords, bass line and drums and copy and paste, then figure out what I want to do add, it takes me out of the moment and I easily get stuck.

If it’s a song with lyrics, I’ll let the beat play, I’ll walk around the room, and mumble gibberish syllables until actual words come out and take it from there. If I get stuck, I start the mumbling thing again, or look at the lyrics from the reference tracks and look for a seed of an idea to build from.

"You have to be somewhat detached from the music you make to really understand the rejection and use it to improve your next submission."
-Owen Chaim

Wow, this is like a “How To” manual, our readers are going to eat this up! I know you collaborate with other TAXI members. How have you met most of them?
I met most of them on the TAXI Forum.

Do you have a day gig?
I sell drugs. I’m a pharmacist.

Ah-ha! So you do have the right background for Hip-Hop! Just kidding. How do you balance your job and making music?
I don’t really see it as balancing the two. I just do music when I’m not working or with my family.

How often do you write?
I work 12 hours every other weekday and every other weekend so every other weekday I have a solid 4-5 hour block of time to work on music. That’s after I drop off the kids and get groceries and before I get dinner started. If we get take-out food I get an extra hour in the studio! The weekends that I’m home I don’t get as much time in the studio. But when I work Saturdays, the family is usually visiting the grandparents, so I have another 3-4 hours when I get home from work.

I like that you cook! I think it’s very analogous to creating music. How long does it take you to write and produce an instrumental cue on average?
It usually takes 4-5 hours.

How many placements have you had with your music?
Approximately 150.

Have you discovered any patterns, techniques, styles, tempos, instrumentation, etc., that tend to help get your music used more frequently?
Simplicity. I find that really inspired but simple ideas get used much more than the busy ones. It’s no surprise, really, because it’s brought up all the time when advice about production is discussed, from TAXI TV to the listening panels at the TAXI Road Rally.

"If you’re waiting until your skill level improves to where you think you’ll be confident in the music you submit [to TAXI], you’re wasting your time."
-Owen Chaim

How do you deal with the rejection when a song or track of yours isn’t forwarded by TAXI or picked up by a music library?
You have to be somewhat detached from the music you make to really understand the rejection and use it to improve your next submission. What hurts is when you can’t detach yourself from the music you make and that rejection of the music becomes a rejection of who you are. I think that attitude is vital to being able to stay in this for the long term.

I think it was harder at the beginning, in my first few years as a TAXI member — taking those returns — because it was taking a long time for me to improve the quality of my music. I also had nowhere else to send my music to. Now that I have a few libraries that I’m working with, the returns are even less discouraging because I can send those tracks to one of those libraries [to see if they can use them].

You know a lot of TAXI members: experienced “old-timers” and some newer members that you’ve met on the TAXI Forum and the Road Rally. What would your advice be to the newer members that might help them become successful more quickly?
From seeing all the listings for different genres and styles, don’t be tempted to try styles you’re not familiar with. At least, not in the beginning. Do the style of music you know, that you do best. Your experience with that genre will be your head start, and you’ll achieve that forward and further success much more quickly.

Any advice for the folks who have been “watching” TAXI for years, and have never pulled the trigger and joined?
Watching TAXI from a distance is okay for a while to get a sense of what the company and the licensing business are about. I think that’s smart. But, what’s not so smart is if you’ve seen how TAXI works and you want to start writing music for placements but you don’t join TAXI. If you’re waiting until your skill level improves to where you think you’ll be confident in the music you submit [to TAXI], you’re wasting your time. You won’t progress nearly as much on your own without the valuable feedback you get from [TAXI’s] screeners.

And finally, if there was anything you could go back and change in your musical career, what would that be?
I’ve read that a lot of TAXI members regret not joining earlier. But for myself, I wouldn’t have been able to join any earlier. I just wasn’t in the right headspace for it because of the music I was doing. So what I would change if I could go back is; I would have liked to learn to play more instruments like Jazz guitar, trumpet, Jazz piano, as well as engineering and composition. But then, saying that discounts the impact Hip-Hop has had on my musical journey. When I would have had the time and opportunity to pursue all that, I was too busy scratching records, making beats, and writing raps.

How to Write Music for Sync Licensing
Read the article