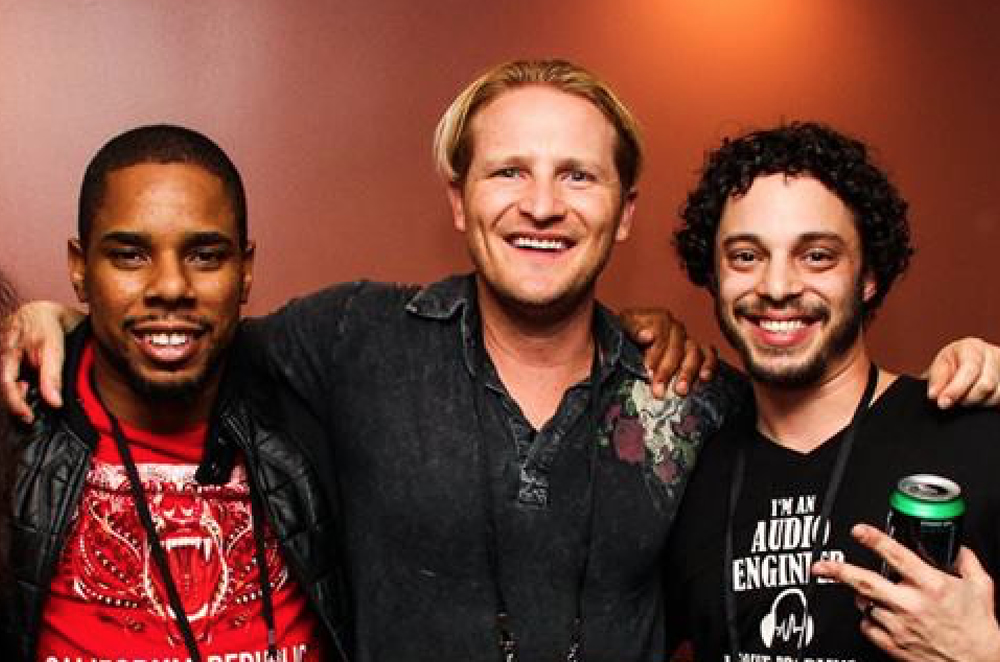 I remember an email you sent me that talked about your collaborations with old and new members. I think it’s cool that you work with people who are new to the whole TAXI “ecosystem.” Is the collaboration experience any different with folks who are relatively new, and can you give any advice to the newer members?
First of all I never called anyone “old.” [laughs] I’ve worked with experienced, successful TAXI members, as well as newcomers to the TAXI world. What we all share is a great passion for our music and what we do. The more experienced members have a better handle on what works, and seem to have a laser focus on what they do best.

I think newer members (myself included when I first started) try to be a little bit of everything. Just because I know how to play basketball, enjoy it, and have seen it done properly, doesn’t mean I’m ready to go up against LeBron. I discovered this pretty early. Just because I am physically able to produce and write in a myriad of genres, and I know what they sound like when done right, doesn’t mean I’m ready to go up against the life-long composers in those genres. There’s a place where you fit … always. You will recognize it because it will feel easy, almost surprisingly so. It’s all about the ease and flow, and not forcing it, or becoming too attached to the outcome.

How much of your musical output is song related vs. instrumental cue related?
It's just about a dead even race at the moment. I did the math and it's 58% in favor of vocal songs.

Was there anything you had to “un-learn” when you started doing cues?
Mixing instrumentals for records and music library cues are a bit different. Records are about standing out, and library cues are more about getting out of the way. Snares and high end are something that you need to be careful of with cues.

"I think newer members (myself included when I first started) try to be a little bit of everything. Just because I know how to play basketball, enjoy it, and have seen it done properly, doesn’t mean I’m ready to go up against LeBron."

Some people have an aversion to doing cues for music libraries. It’s almost like they think it’s beneath them. Does it ever feel like it’s some sort of lower level of music to you?
No way. It's amazing how an instrumental can get out there and work for you.

What are some of the genres you’re most prolific in, with regard to instrumentals? The Urban genres for sure. Hip-hop/rap/trap, R&B/Soul, Jazz fusion, Pop.

Do you go for mood or compositional brilliance?
I take the inspiration where it leads at the time. I close my eyes and can hear the whole song finished in my mind. I chase that sound till it matches. Then I move on.

How many cues do you finish in a given month, more or less?
I've been close to a song per day average. It works out to about 25-30 full songs and/or cues a month, give or take, depending on requests. 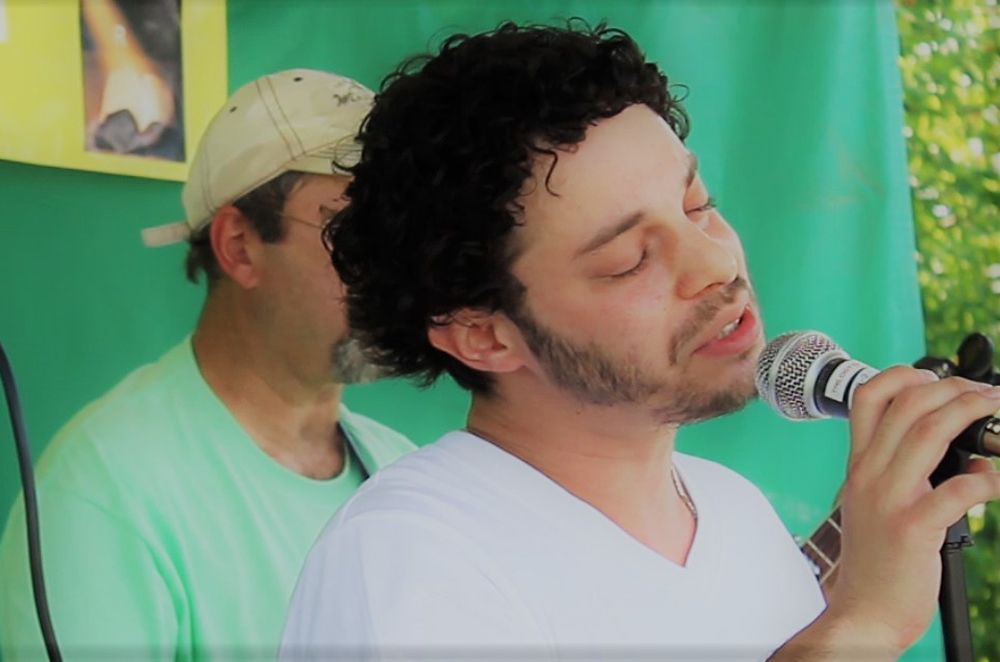 How many cues and/or songs do you have signed to publishers at this point?
At the Rally my mother and I met a publisher that takes vintage songs. We were blessed to be able to sign a lot of our past catalogs. Not counting that, I'm happy to say we just hit the 100 new songs signed mark since the Nov 2016 Rally. :)

How many placements have you had, so far, even though it’s still very early in your TAXI “arc”?
Somewhere between 30-40 so far.

UPDATE—Marcus sent us this email update in mid-August of 2017:
Just wanted to shoot you a quick update before the last part of the interview goes out. As of last night, the total is 190 signed songs (since the Rally). Thanks to some new requests from one publisher we met through TAXI, and a large group of songs signed to another company we met at the Rally (also including collabs with TAXI members such as Matt Vander Boegh and Andy Gabrys). I also had a few new placements, including two on Viceland's Huang's World, thanks to some cues signed to yet another publisher right after the Rally.

My mom has also been doing very well, also signing songs to a TAXI-related publisher, which were immediately pitched to a music supe for a new show. Thanks again for everything, guys! See you in LA in 75 days!! Have a great weekend!

"I definitely feel that TAXI offers the best collective experience, not just for access to opportunities, but entrance into what a musical community is supposed to feel like."

I’ve heard some of the collaborations you’ve done with members like Matthew Vander Boegh. Has it been much of a learning curve to work long distance, while not being in the same room?
Absolutely not. I was used to working over distance through stems and transfer sites already from my studio work. It was actually awesome to work with guys like Matt and countless other TAXI members because they were used to working fast as well.

Are there any common mistakes you hear newer members making in regard to their approach to pitching?
Not following the “Write, Submit, Forget, Repeat” mantra. Follow the mantra! Actually, follow the whole TAXI process. Most of these mistakes are common like you say, and are totally covered in the Forums. Pitching the same song to everything, whether it fits or not. In general getting attached to one song or project is problematic. Follow the mantra, and take advantage of every little thing TAXI offers.

Something I’ve heard over and over and over again throughout the years is, “Don’t join TAXI until you’ve got a big catalog of major label quality music.” My feeling is that most people never build a catalog at all, left to their own devices. But, if they become a TAXI member, they’ll be motivated, number one, and number two; they’ll be building the right catalog because they’ll be surrounded by like-minded people.
Agreed. And not only that, but they will be creating based on the cutting edge Listings, so they will certainly build the right catalog. If someone enjoys making pottery, and then joins a community where everyone else is also making pottery, and are also being asked by retail stores to create new and exciting objects, I think their output and resultant collection would increase exponentially as well. If in the end (whatever that means), you end up with a kickass collection of tunes, I’d call that a win. Steel sharpens steel. TAXI makes you better, point blank.

Am I tripping or just biased because I own the company, or does the whole TAXI experience help you build the right catalog? Trippin’ you are not Michael. I'll say it again as well. Follow the formula and use everything TAXI provides. Within the industry I definitely feel that TAXI offers the best collective experience, not just for access to opportunities, but entrance into what a musical community is supposed to feel like. 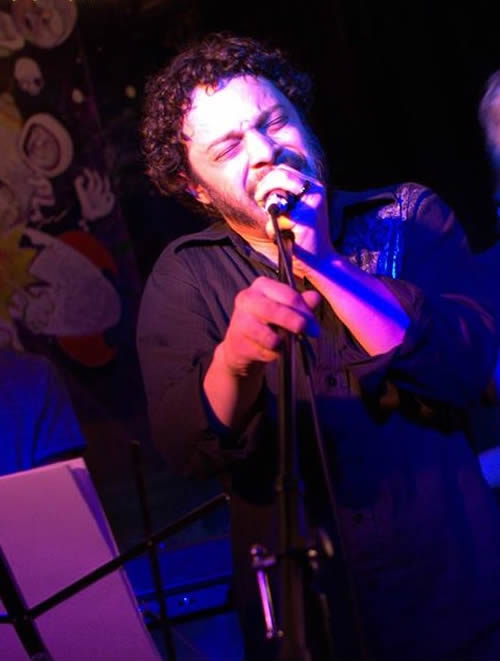 About a decade ago I coined the phrase, “The musician middle class.” My theory was that becoming masterful at creating music is similar to other skills or trades, so musicians should be able to earn an equivalent income from their music. Do you think it’s possible to earn what a plumber or electrician makes from being a skilled musician who has invested a similar amount of time?
Yes, absolutely. It's like starting any business. When you start a plumbing business on your own, you’d be surprised how many people need a plumber. It’s no different. TAXI happens to give you the phonebook of people who need plumbers… they just happen to be looking for the best plumbers in the biz. So get damn good at what you do best, then go give the people what they need.

You don’t strike me as somebody who considers himself a starving artist. Is that part of your DNA, or did you have an epiphany that helped you realized you could earn your entire living by making music and doing what you love to do?
I have a mother who would never let me give up on myself. She also showed me that you can do what you love to do—what you do best (what’s effortless and makes you happiest), and people will show up who value your skills. So yes, it’s engrained in my DNA to never give up, and follow what I do best and what brings me the most joy. It should be no different than any career choice. Make the choice, jump in with both feet, never stop learning, and that will attract people who value your skills. I started my studio with one client, only word of mouth, and no advertising. And I was able to attract people who needed exactly what I provided. Trust your gift.

"There’s a place where you fit … always. You will recognize it because it will feel easy, almost surprisingly so."

Favorite song?
Eesh. That’s like saying favorite word in the English Language… Brian McKnight – “Never Felt This Way,” comes to mind. But I’m angry with you for making me pick one, haha. I can barely pick one favorite Brian McKnight song.

Favorite songwriting tip?
Let it come to you. Never force it. It doesn't work.

Favorite film/TV cue composing tip?
Listen to the stuff that gets used on TV. Especially the ones using the genres you specialize in.

Favorite mixing tip?
Mix so that 0dbVU (0 on your DAW fader) is = -18dbFS (Analog console style metering). Understanding how people mixed before computers will make your computer recordings sound much better. I also use a K-14 Meter on my master fader. Watching and understanding your levels during mixing will make mastering a breeze.

Favorite placement so far?
Probably The Kardashians to be honest. It was one of those goals I had set up in my mind, and I spoke it into existence. I knew they used the styles of music I made. I also knew other TAXI members and TAXI-friendly publishers were landing on there. So I said to myself, “My music will end up on that show.” Thanks to a publisher I met at the Rally, my music was on every episode this season.

Wow, congratulations! That sure beats complaining about how the industry hasn’t given you the breaks you deserve. I totally believe that your positive attitude has a lot to do with your ever-growing success.

And finally: If there was one thing you know now, that you wish you’d known when you were first starting out, what would that be?
Relax. Happy thoughts. Put the Happy first. We are all doing this because we know it will make us happy. Creating music makes us feel good, not the imagined outcome or result. Feel good first, just let that be the reason. Mindfully enjoying what you are doing while you are doing it attracts more things that mirror that enjoyment.

Music from Marcus and collaborators: https://soundcloud.com/wewillwriteuasong

Getting Comfortable With Production, Part Three
Read the article

How to Prepare for the TAXI Road Rally
Read the article