How Do Our Members Really Feel About TAXI? 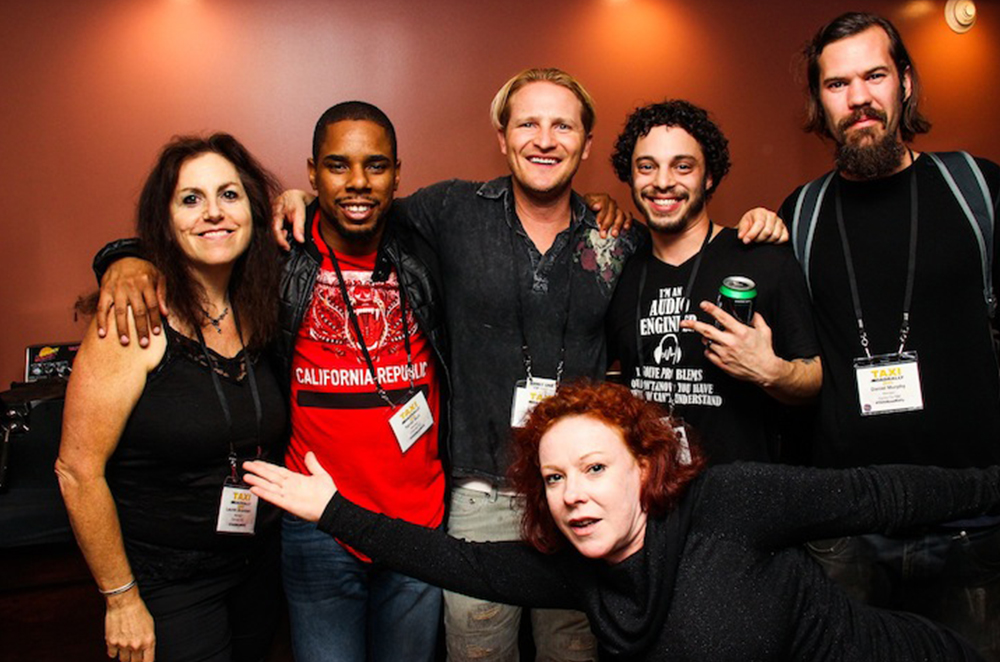 TAXI brings members from all over the United States and the world at the Road Rally, our annual convention.

I love sharing emails from members with our staff and the experts that make up the TAXI A&R team. We love hearing that the work we do impacts musicians’ lives all over the world!

Like most businesses, the majority of the comments we get are from people who have an “issue” they need resolved. The happy people are largely quiet because they’re happy! So, we really appreciate it when happy TAXI members take the time to share the good stuff!

I don’t do a very good job of soliciting comments from our members, so I’m asking you now! Please send your thoughts to memberservices(at)TAXI(dot)com. Our staffers and screeners get energized when they see how their work has a direct impact on our members’ lives and careers.

Got a story? Send it in! We’re always looking for new people to spotlight in our Passenger Profiles and Featured Member articles.

Here are a couple of emails that came in very recently. Both of them really got our staff (and me) jazzed about what we do here every day. Thanks for taking the time to write, Christine and Steve!

By the way, we’ve left these largely unedited, except for small typos or punctuation. We want you to read these in our members’ own words.

All the Best,
Michael 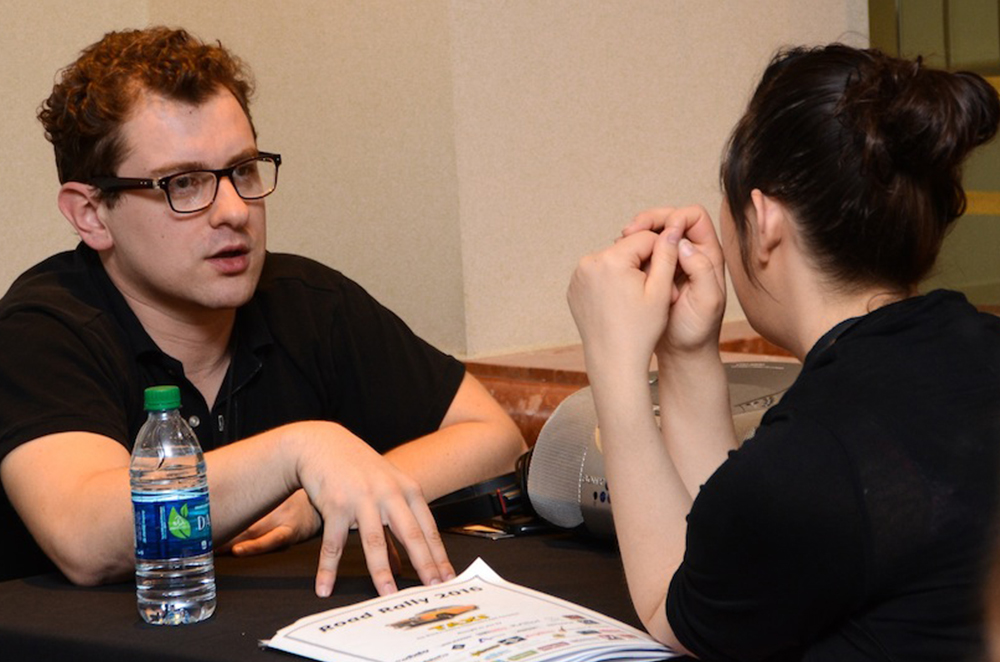 Dear Michael and the TAXI team,

I'm writing to thank you for all the opportunities you have afforded me. I am starting to see some success and wanted to share it with you in the hopes that it encourages other members.

I became a member in 2012 and made very few submissions – only from an album I had recorded in 2007. While I got great feedback, I didn't quite know what to do since I had very few recording skills and couldn't meet deadlines if I had to write and hire someone to do the recording, mixing, and mastering. I also didn't know how to read the listings accurately and interpret the examples. I took a Pro Tools class in late 2012 and started learning how to record, produce and mix my own tracks. I still made very few submissions, yet received my first forward in mid-2013. In November I attended my first Road Rally and really started to understand the format of instrumental tracks, the success that could be had by them, and how that could be the 'bread and butter' of my business. I figured out that writing lyrics, singing, and producing was a much slower process, and after attending Robin Frederick's class (and watching her and others on TAXI TV) that I had a lot to learn about writing songs. I decided to just focus on instrumental pieces and hone my writing and recording skills.

In the first half of 2014 I received 27 forwards, and in June I had my first deal with a [music] library. In July I got my second deal. From that point until December 2016, I focused all my efforts on developing the relationship with these libraries and providing as much content to them as possible. I attended the Road Rally in 2014 and again was inspired and learned so much – mostly that I need to keep going and that I was on the right track. In my One-to-One Mentor Session [at the Road Rally] I also met with an owner of a music library and he asked for a couple of the tracks I played him.

In early 2015 I received my first placements, and in October of 2015 got my first ASCAP check of almost $800. I continued to get a little residual income after that, but the checks got smaller and smaller. I got a few more placements, but not a significant amount.

The remainder of 2016 was limited in that I had a move, work and other life things going on, and I was writing solely for the two libraries and minimally for the third (the third was changing directions and were only requesting music periodically).

In November of 2016 I attended my third Road Rally, and got re-inspired and affirmed that my approach was on track. I'm pretty shy, so I didn't network much, but did talk to a few people in one line I was in. The best decision I made that year was to attend the Mentor Lunch. I was so excited to meet and talk to so many of the people I'd seen on TAXI TV and taken classes from. They were helpful and personable, and took music from everyone who wanted to offer it from our table.

"The best decision I made that year was to attend the Mentor Lunch. I was so excited to meet and talk to so many of the people I'd seen on TAXI TV and taken classes from."Christine Cochrane

I started writing and submitting to TAXI listings again in December of 2016 and was getting better than 50% forwards. As I kept writing, I started doing too many tracks and saw my forwards decline. Since then I have cut back my production and focused more on quality. As a result, my forwards have increased again.

As of June of this year I've had 84 placements on 5 networks (MTV, E!, A&E, Bravo, and Fuse). Yesterday I was invited to place music with another music library because of a TAXI forward!

Slowly but surely I am continuing to grow and learn through the education you offer and the feedback of the screeners. However much the returns hurt, I almost always learn something if I'm open-minded.

Overall, I just wanted to say thank you for all you and the TAXI team do. I will continue to let you know as my business and earnings grow! 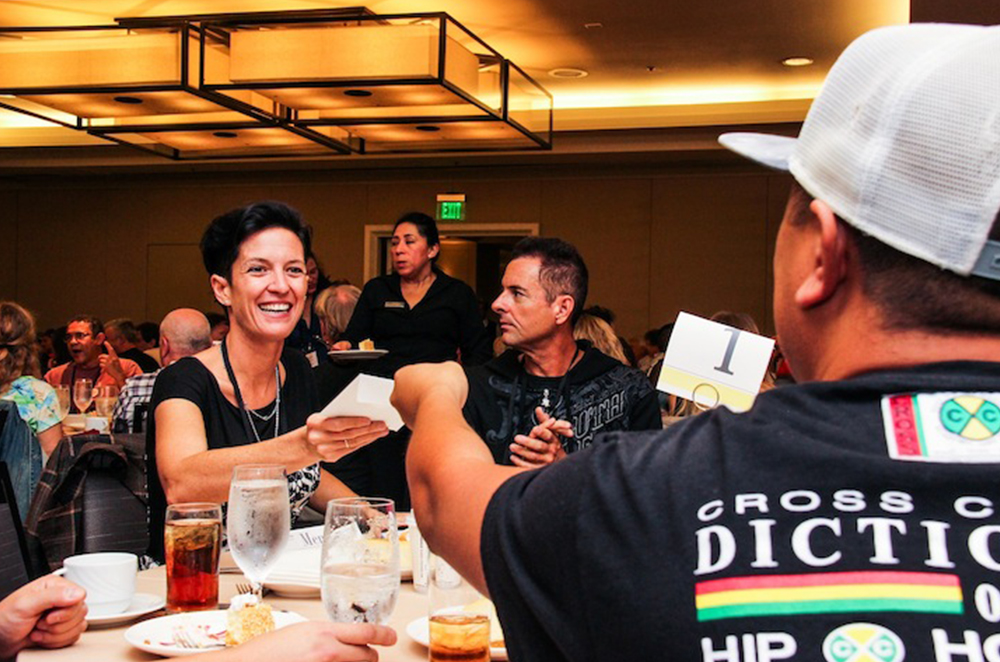 TAXI A&R person and Film/TV music expert Brooke Ferri takes some music from a member during the Mentor Lunch at our 20th Road Rally.

I was just in the middle of watching TAXI TV with yourself and Matt Hirt on the "5 Yr. Plan" episode (I tried watching one live 2 weeks ago, but had tech issues and kept losing the connection).

For some reason I felt compelled to stop mid-stream, grab my email, and immediately write you to say how much I'm enjoying this particular one, (maybe I'm just odd, actually I know I am :-). It's nice to be watching without too much fluff or hype (not that I mean that as always a bad thing :-). Just nice to hear two people offering insight and information content without too much generic sugar coating. So thank you kindly.

Both yourself and Matt seem to always come across as down to earth, genuine and authentic operators. I have to say I honor that as a progressing TAXI member looking to the future for my own sustainable music creation. It helps keep me on track and trusting my vision.

Any videos with yourself interviewing (Matt in this instance) have made me feel good about my longer term success process, and remind me to go easy on myself, despite how much I seem to be challenged finding suitable lyricist/vocalists to fit into my vocal productions at this time. But that will change as things progress.

"It is hard to know where to invest music development money due to the amount of people looking to make their money off of creators trying to refine their income generating, music making model."Steve Nicel

I'm really glad I decided to give TAXI a shot, despite spending (aka: giving away) too much money to various other "development platforms" over the past 20 years, with little real-world benefit returned for me as a solo, remote creator/operator.

It is hard to know where to invest music development money due to the amount of people looking to make their money off of creators trying to refine their income generating, music making model. The nature of art and money I guess.

So, thank you for your honest approach and genuine tone of content. Keep it coming.

I look forward to a day when I'm [able to] make the trek over the pond from Australia to meet yourself and other similar members in person. That would make me smile...

Getting Comfortable With Production, Part Two
Read the article

How Do Our Members Really Feel About TAXI?
Read the article