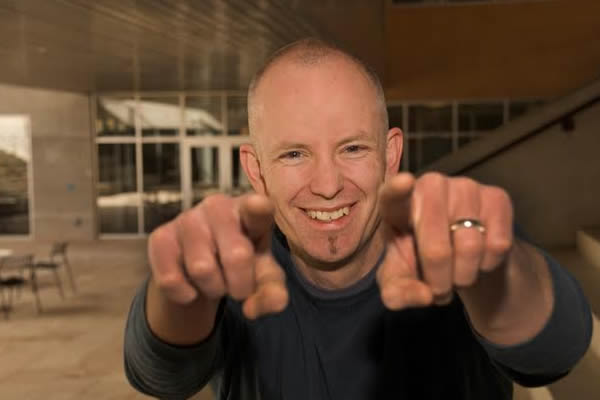 Andy's home studio is pretty basic, yet the music he creates in it is broadcast quality and used in TV shows and films on a very regular basis!

This is the final installment of the epic and wonderfully informative interview we did with songwriter, composer, multi-instrumentalist, engineer, and producer, Andy Gabrys. If you haven’t read all three of the preceding installments, you should check the Transmitter Archives or Google and read them all. There’s a wealth of information in them! - Editor

My observation is that composers who don’t know the drill yet, worry too much about composing the next great opus, rather than noticing that simplicity often works best. Do you see that as well?
Absolutely! It’s the hardest thing for me to write something simple.

My “compositional method” is something maybe like Beethoven – I am a scratcher. I have seen original scores of his where there are holes in the paper where he kept revising and scratching out old ideas.

I record lots of ideas and then I edit them to death and keep paring down until I get to the kernel of the idea. Usually that provides the strongest base for my cue. Then I add parts so there is a dynamic curve, but they are mostly textural doubles, or unison or octave doubles of something that is already there. It was amazing when I learned how to write a piece that is in form A, A, A, A, A. It’s minimalist in a way because you are conserving ideas.

If every cue that you write takes three different ideas, you have less in the “idea well” than if you write each piece with only one idea. I think that simpler pieces work better under picture as well. It might seem like by itself its not got enough MUSIC happening, but I try to remember that the music is supporting the picture, and the music isn’t the star by itself in most cases.

I know each type of cue dictates how long it will take to do it from start to finish. How long would it take you to write, record, and mix something sort of mid-level, like a guitar-based Pop/Rock cue?
Usually in a day, and often in four hours or so if I am in a groove. I am usually mixing as I go. As I keep on laying in parts I often adjust level, eq, compression, ambience, etc., so it’s sounding closer and closer to complete.

Sometimes I will get ideas down for four or five pieces and then spend a few days listening to my refs and writing down specific feedback that I think my pieces need. So I might get a piece done in a day, or I might do two or three in a week.

"I think that simpler pieces work better under picture."

Production music is definitely a quantity game, but if you don’t have quality too, you might not get any placements.

Do you always write to a brief or TAXI listing at this point, or do you ever create something based on simply noticing that your hear a lot of a particular genre being used in shows?
At this point most of what I write is targeted to specific briefs, although I am submitting to more TAXI listings again to widen my contacts.

I will write a few pieces each month that might not get finished but they are usually pushing into areas that are new for me, or uncomfortable for me. Stuff like really contemporary Pop or stuff that has a lot of synthesizers or specific sounds in it often takes a few attempts until I feel like I have got the “feeling” right. On my audio drive I have a couple hundred abandoned attempts. Occasionally, I will listen to a few and see if there is anything that I can use. Usually I don’t find much! [laughter]

Do you think about the mood you’re trying to create before you start?
Yeah, in the way that most of references in the TAXI listings or briefs I get have a sort of “vibe” and I try to replicate that. I don’t think in terms necessarily of “key words” for mood though.

Can you give our readers sort of a Step One, Step Two list of things you do when you start a cue. Is it like; determine the mood, find the tempo, lay down the click, sketch out the arrangement, etc. or am I imagining it all wrong?
Usually I do a little listening and come up with a text document of shorthand notes. Instrumental palette. General tempos. General mood, general genre.

Then it’s right into Logic or Pro Tools:

How do you know when it’s done? Is it hard to resist the temptation to keep adding more parts?
Yeah I get that. Usually, I have so much stuff in there that I just cut and cut and cut! I usually run out of time (those three-hour windows) which helps keep things moving along and staying concise.

"Production music is definitely a quantity game, but if you don’t have quality too, you might not get any placements."

How much thought do you put into your titles?
Some thought… it’s a work-in-progress. I learn a lot by seeing how other people titled their pieces. I try to strike a balance between a title that relates to the genre, and a “cool title.”

How do you balance family and your workload?
I just do the best I can. Sometimes things get really busy family-wise, especially if it’s during a school break. I’m the default at-home parent, so a lot of that responsibility falls on me.

Final question: Now that you know what you know, is there any advice you’d give yourself 10 years ago?
Get going! Make a mess! Fail Fast!

The TAXI Ecosystem
Read the article