How to Get Music Supervisors to Ask for Your Music 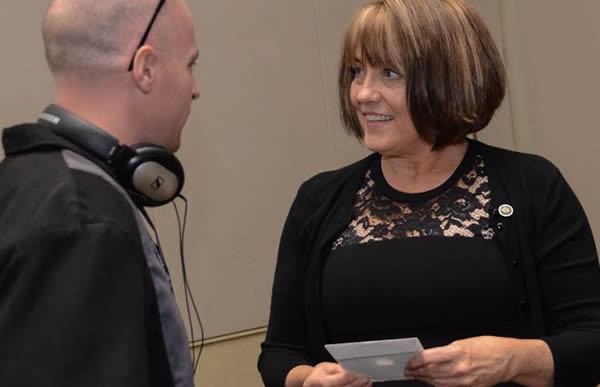 TAXI’s free convention, The Road Rally, is just around the corner (November 5-8 in Los Angeles). When the Rally is over, I always get emails saying, “I can’t believe that a music supervisor actually asked me for my music!”

It’s true, and it’s no exaggeration to say that it happens every year, and it happens much more often than you might think! And it’s not just music supervisors!

Multi-Platinum record producers, music library owners, A&R people from record labels, and publishers have all signed or used music from TAXI members resulting from impromptu meetings at the Road Rally. The question is, why does it happen for some people and not others?

Are some people just better schmoozers than others? Probably, but that doesn’t really matter!

Can you be shy and still make a connection at the Rally? Yes, absolutely!

The Best Approach Is a Stealthy One!
When I review photos of each year’s Road Rally, I see numerous shots where a large group of people are lined up near the stage after each panel. Their arms are outstretched with CDs in hand. “Can I give you my CD?” is the question, and the panelists are usually kind enough to take them. They leave the ballroom with dozens of CDs, but will they listen? Maybe.

Maybe the most effective place to meet industry people is during One-to-One Mentor Sessions. We have them at the Road Rally. You get 15 minutes of face time, and the “soft-sell” approach is to ask the mentor something like, “Can you listen and let me know what you think of the mix?” It takes the pressure off them to comment on the music itself, but they usually do!

If they hear something they like, mentors will almost always ask you what else you have. I can’t even begin to count how many stories we’ve heard about deals happening that resulted from the Road Rally’s One-to-One Mentor Sessions, year after year.

Head to the Bar!
Even if you’re not the type of person who likes a good beer every now and then, the hotel bar at the Road Rally is world famous for being the epicenter of collaborations, deals, and ultimately placements in TV shows and films. But again, the stealthy approach is often far better than walking up to an industry person (or even another TAXI member you’d like to collaborate with) with an outstretched arm and a CD in your hand.

If you see your “target” at the bar, mosey on over and ask something like, “Does the orange slice really make that Blue Moon taste better?” That’s a safe conversation starter that will often lead to them asking something like, “Is this your first Road Rally?” Eventually, they’re likely to ask what kind of music you make! Have a good answer ready to go, and avoid saying, “I do Rock, Pop, EDM, Blues, and some Country.”

They typically want to know what you do best, and if your strongest genre(s) lines up with what they need, bingo, they’ll ask you for a CD or thumb drive! And if your genre doesn’t line up with what they need or use, do NOT give them something they can’t use! I know you’re dying to have them hear how talented you are, but no square pegs for round holes. Instead, ask them what they typically need, and ask if it’s okay to send them something in that genre, should you ever have it. 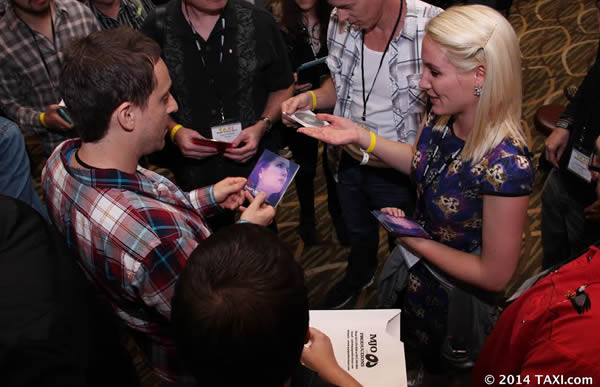 Music Library owner Ben Davis checking out music from TAXI members after his panel wrapped up.

Elevators, Hallways, and Restrooms Rock!
We always encourage people to stay at the Rally hotel because it’s amazing how many chance meetings take place in elevators, hallways, and public restrooms! Now, I’m not recommending that you stalk a music library owner or music supervisor who just finished a panel. But they often head to the restroom right after a panel for obvious reasons.

Trust me, nobody likes to be approached while standing at a urinal. But you’d be shocked by how many people don’t hesitate to approach somebody “mid-stream.” I know because it’s happened to me. Bad form, to say the least!

After the industry person has taken care of business, and they’re at the sink washing their hands (hopefully), use that moment to say, “You were great on that panel, do you mind me asking how you got into the business?” As you walk out of the restroom together and you’re still chatting, ask them, “Got a few minutes for a quick beer?”

The Best Advice of All!
If they join you for the beer, do not, and I repeat, do NOT talk about yourself or your music until they ask you. Everybody loves to talk about him or her self, so keep the conversation focused on things like, “When did you move to LA,” “How did you get your first gig,” “What’s a music supervisor’s biggest challenge,” or “Do you play an instrument and write any music?”

They’ll often spend an inordinate amount of time with you, and at some point, they’ll ask you what you play and write. And yes, they’ll probably ask you to give them some music!

Hotel hallways are great places to meet industry people as they are coming from or going to their room. Departing the room for the elevator is great because you’ll have a “captive audience.” Once again, compliment them on their panel if you can, and ask them about their life. You may be dying to give them your music as soon as the door shuts, but that’s really not the best approach.

Don’t Blow It!
Speaking of bad approaches, I promised to tell you how to avoid blowing a great opportunity, so here we go! Maybe the worst thing you could do at a chance meeting is to start by saying, “My name is Don Jones, and my music is really, really good, you should hear it. I do just about every genre you can think of, and everybody tells me it’s awesome.”

As you scramble to find a CD or thumb drive in your bag, they’ll be thinking, “Dear Lord, I can’t wait to get away from this guy!” Claiming that you do a great job of making music in virtually every conceivable genre is a dead giveaway that you’re a rookie… at least a rookie at pitching your music!

Handing somebody your music and saying, “These aren’t my best songs. I’m working on new material, but you can get an idea of what I do if you listen to these,” is a fatal mistake. They’ll be walking away mumbling, “Why would somebody bring anything but their best music to an event like this?”

You’ll be much better off following the, “Tell me how you got started,” approach, and asking for their contact info so you can send them something down the road.

Another common mistake is handing out cheesy looking business cards, especially with crossed-out phone numbers or email addresses. Unless they’ve asked you for your card, it’s extremely unlikely that they’re going to hang on to your card (and hundreds of others), then call you months down the road to say, “I got your card at the TAXI Road Rally, and I was wondering if you have any good music for me?”

That would be a huge waste of time, and it’s almost a sure bet they would go to trusted sources when they need music, rather than reaching out to somebody whose music could be good, bad, or anywhere in between.

The Secret Weapon
I’m not kidding when I say this is THE most effective thing you can do to score a direct hit when somebody asks you for a copy of your music. Do your homework before you leave home and come to the Road Rally!

Once we publish the final schedule of events, and you see who the panelists are and what they work on. Watch their shows and most recent films so you can know exactly what they need! It doesn’t matter if you’re Ludwig Van Beethoven if they frequently need EDM instrumentals for their show.

However, if you’ve done your homework, and know that you’ve got what they need and follow the advice above, when they ask you for your music, you’ll be able to give them exactly what they need! Bam!

Last year, we had the music supervisor for the Kardashians on a panel at the Road Rally. Imagine this scenario…

“Hi, I thought you were great on that panel. I had no idea how many pieces of music you go through every week for each episode. How did you learn how to supervise?” And when the Kardashians’ music supervisor asks you what kind of music you do, you can say, “Mostly instrumental cues for reality TV.”

“Cool, do you have a any music with you?”

“Yes, I do. Would you prefer Tension cues or Dance/Pop instrumentals?”

“Actually, I need both for the show!” Bazinga, you’re in!

Don’t Make This Fatal Mistake!
And finally, make sure that you put your name, email, and phone number on the CD itself, on the sleeve or jewel case as well, and in the metadata of your digital files. There’s nothing that will kill a placement and ruin your reputation faster than somebody hearing music they can use, then not being able to contact you.

Good luck, happy pitching, and I hope to see you at the Road Rally!