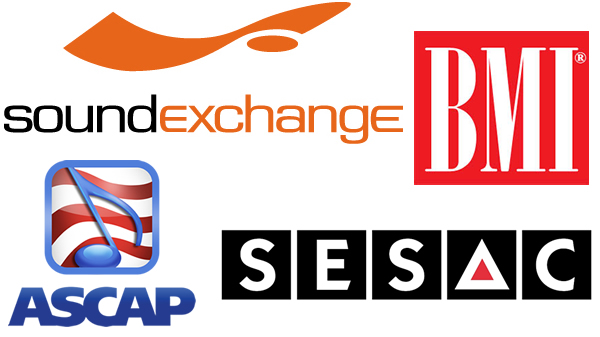 [This article was written by Dae Bogan and it originally appeared on his website. It is used here with his permission and that of CDBaby as well!]

I received an email this morning from a reader who had read my piece, “Demystifying The Music Industry: What’s This About Public Performance Rights?.” He asked, “If SoundExchange was designated by the Library of Congress as the sole PRO to administer public performance licenses and also collect public performances fees for Sound Recording Company Owners, then why do artists still utilize the services provided by the other 3 US PROs (ASCAP / BMI / SESAC) – is [SoundExchange] not sufficient by itself?”

A lot of indie artists are confused about the difference between ASCAP, BMI, SESAC and SoundExchange. I’ll attempt to break down the most important differences between these groups and elaborate towards the end about other considerations and other royalty collection entities. Feel free to comment with any questions (or corrections).

Traditional performance royalties vs. digital performance royalties
ASCAP (American Society of Composers, Authors, and Publishers), BMI (Broadcast Music, Inc.) and SESAC are US public performance organizations (PROs) who collect publishing royalties (performance royalties) for the PUBLIC PERFORMANCE of musical works as stipulated by the U.S. Copyright Act. This includes fees paid by radio stations, businesses, restaurants, concert venues, bars, nightclubs, sports arenas, bowling alleys, malls and shopping centers, amusement parks, colleges & universities, etc. for performing music in the public (within the confines of their establishment). These monies are paid to ASCAP, BMI and SESAC for a blanket public performance license that grants the licensee (the business) permission to allow music to be performed in their environment (this includes music over speakers and music performed live by an artist). The license fees paid to ASCAP, BMI and SESAC are passed on to the copyright owners in the musical works (song) — PUBLISHERS (50%) and SONGWRITERS (50%) — as performance royalties for musical works.

[Editor’s note: ASCAP considers the publisher’s share and songwriter’s share to each be 50% of total performance royalties. BMI talks about these same splits as 100% for the publisher and 100% for the songwriter. It gets a little confusing, but they’re essentially talking about the same money split up in exactly the same way. It’s just that ASCAP uses percentages that are based on total performance royalties (thus 50/50), while BMI splits those halves FIRST, and then distributes 100% of each half to the appropriate entities.]

SoundExchange is a US public performance organization (PRO) who collects royalties for DIGITAL PUBLIC PERFORMANCE of sound recordings stipulated by the Digital Performance Right in Sound Recording Act of 1995 and Digital Millennium Copyright Act of 1998.

[Editor’s note: SoundExchange only collects these digital performance royalties for NON-interactive streaming (the kind where a DJ, algorithm, or other outside force is determining exactly what you hear).]

[Editor’s note: Spotify, iTunes Radio, and Rdio have struck deals with labels and distributors to pay digital performance royalties directly to rights holders — thus bypassing SoundExchange. But again, digital performance royalties are only owed for non-interactive streams which occur within those services’ radio-like features, NOT in their on-demand capacities. For a complete list of who paid royalties to SoundExchange in the last 3 months of 2014, click HERE. Thanks to Ari Herstand for that link.]

* With some exceptions (mostly political) SONGWRITERS do not receive digital statutory royalties in sound recordings (SoundExchange) unless they also recorded the song with their vocals. So, Diane Warren does not earn digital statutory royalties in sound recordings when you hear any of the songs she wrote for Whitney Houston, Enrique Iglesias, Faith Hill (and the list goes on) on Pandora or iTunes Radio. [Update: However, Diane Warren does earn public performance royalties in the musical works (ASCAP/BMI/SESAC) for these transmissions (Thanks Professor Surmani of the Masters of Artists in Music Industry Administration program at CSUN for catching this misleading omission!).]

Terrestrial radio stations, such as KISS FM, only have to pay ASCAP, BMI, SESAC public performance fees for musical works, but not SoundExchange digital performance fees for sound recordings because of special stipulations in the US Copyright Act for broadcast radio. This is part of the reason why Pandora wants to reduce the royalties it pays.

[Editor’s note: However, many terrestrial radio stations also have digital broadcasts or offer alternative playlists on a counterpart digital station. Those stations DO have to pay digital performance royalties to SoundExchange for those non-interactive streams.]

* Royalties collected by SoundExchange can expire if the artist does not register to collect them!!! [See THIS article for more details, and to learn how CD Baby can help you collect unclaimed digital performance royalties BEFORE they expire!]

There are lots of other sound recording royalties (besides the digital royalties collected by SoundExchange) that are collected on behalf of featured recording artists, non-featured artists (ie. background or session vocalists), instrumental musicians, etc. They include:

* Sound recording revenue (also known as DART royalties, which stands for Digital Audio Recorders and Tapes) generated from the U.S. Audio Home Recording Act of 1992 (AHRA). Manufactures and importers of audio home recording devices (such as tape recorders) and audio home recording media (such as black CDs) pay a royalty to the Copyright Office;

* Sound recording revenue generated from reciprocal Private Copy agreements with numerous foreign collectives in countries that also have legislation providing these royalties such as: Japan, the Netherlands, Hungary, Spain, Portugal, Greece, Germany, Latvia, and Estonia, just to name a few;

* Sound recording revenue generated from a treaty with AIE, Sociedad de Gestión – the Spanish Rights Collective. The Audiovisual Division of the AFM & SAG-AFTRA Intellectual Property Rights Distribution Fund (established in 2010) distributes payments collected from any television show or motion picture that is broadcast on Spanish television and contains the performance of an AFM or SAG-AFTRA vocalist;

* Sound recording revenue collected by the Symphonic Royalties division of the AFM & SAG-AFTRA Intellectual Property Rights Distribution Fund, which are royalties for performers on Symphonic sound recordings, including musicians and singers of an orchestra.

* Sound recording revenue from compulsory mechanical licenses for sample use in other songs, copies and re-distribution, and ringtones.

There are lots of other musical works royalties (besides the public performance royalties collected by ASCAP/BMI/SESAC) that are collected on behalf of songwriters, music producers and publishers:

* Publishing revenue from synchronization rights of music to film/TV, video games, or commercial. (Collected by publisher);

* Publishing revenue from lyric print rights used in music apps, books and magazines, apparel, websites (like the lyric websites), or sheet music (such as MusicNotes.com. (Collected by publisher);

* Publishing revenue from compulsory mechanical licenses for record labels or indie artists to record and distribute music works (such as going a song placed with a major artist or an indie artist doing a cover of a song previously performed by a major artist) whether posted on YouTube or sold on a CD. (Collected by Harry Fox Agency);

* Publishing revenue from public performance via ASCAP, BMI, or SESAC (Note: A songwriter can only be registered to one of these guys);

* Publishing revenue from foreign monies via sub-publishing agreements and other licensing arrangements in foreign territories. (Collected by PROs, publishers and other collecting entities depending on the nature of the royalties and legislation);

* Publishing revenue from hundreds of other licensing sources (collected by PROs, publishers and other collecting entities depending on the nature of the royalties and territory)

And there’s more, but I’ll leave it at that for now.
If you want to make sure you’re collecting all the publishing royalties you’re owed worldwide, sign up for CD Baby Pro!
And be sure to register yourself with SoundExchange to collect digital performance royalties!