The Next TAXI Road Rally

Road Rally Registration - Near the Grand Ballroom on the hotel’s first floor. You must have a photo ID to get your Road Rally badge! One-to-One Mentor Registration - Grand Ballroom Foyer – After you register for the Rally, proceed to One-to-One Mentor Registration in the Ballroom Foyer. Refer to the Mentor Bios list to make your selection. Members only, please. One Mentor per member. First-come, first-served basis. Must already be registered and have your Rally badge with you. Dinner – Eat at the hotel’s Daily Grill (the food is really good) with all the new friends you’ve made during Road Rally Registration! Jam Room and Open Mic - The Jam Room is in the Concourse Ballroom (2nd floor) and the Open Mic is in the Mezzanine Theater (top of escalator), backline provided. The Open Mic is on a first-come, first-served basis. Members and guests are welcome to jam and perform!

Registration - Continues at the Rally Registration desk near the hotel’s Grand Ballroom on the first floor. Opening Remarks - Grand Ballroom (1st Floor) – Legendary Record Producer Michael Lloyd. Welcome to the Road Rally - Grand Ballroom (1st Floor) - TAXI Founder and CEO Michael Laskow welcomes attendees to the 23rd Road Rally. Michael will draw a ticket stub (between 9:00am and 11:00am) and one lucky person will win $500 cash to help pay for their travel expenses. Another lucky person will win a Grand Prize bundle, including a PRS acoustic guitar valued at $1,100! You must be in the ballroom and have your ticket stub with you to win! Lifetime Achievement Award – Grand Ballroom (1st Floor) - Jonathan Cain is a Multi-Platinum songwriter, artist, keyboardist, guitarist, and vocalist who has been in three huge bands: The Babys, Bad English, and Rock & Roll Hall of Fame inductees, Journey. He’s also the writer or co-writer of classic hits like, “Who’s Crying Now,” “Open Arms,” “Any Way You Want It,” “Faithfully,” and the mega-hit, “Don’t Stop Believin’.” After 45 years, Jonathan is still playing sold out concerts with Journey, while also launching a new career writing, producing, and performing Contemporary Christian music. Join us as we honor Jonathan for his phenomenal, multi-decade career. The John Braheny Songwriting Award - Grand Ballroom (1st Floor) – Clark Van Norris embodies everything the John Braheny Songwriting Award celebrates: a relentless dedication to song craft, humility, and generosity. In Clark’s own words, “My goal each day is to write amazing and captivating songs, regardless of fame and fortune.” John Braheny’s legacy lives on because of songwriters like Clark! One-to-One Mentor Sessions: Located in O’Hare and Orly Rooms (Mezzanine Level / 2nd Floor) Driver’s Ed Classes: See class grid and descriptions for more info. Eat & Greet Luncheon #1 – Concourse Ballroom (2nd Floor) – You need to have purchased your Eat & Greet ticket in advance, and have your Rally badge with the Eat & Greet Luncheon credential on it to attend. Bring CDs if you’d like to give some music out! How to Secure the Bag: Exploring Untapped Revenue with Shari Hoffman, CEO of Transparence Entertainment Group – Theater (Mezzanine Level / 2nd Floor) How to Get More Forwards, Deals, and Placements – Grand Ballroom (1st Floor) - Join TAXI members Matt Vander Boegh, Sherry-Lynn Lee, and Bob Mete, to get some career-changing advice that will raise your forward/deal ratio and probably lower your frustration level as well. One-to-One Mentor Sessions: Located in O’Hare and Orly Rooms (Mezzanine Level / 2nd Floor) Driver’s Ed Classes: See class grid and descriptions for more info. Film & TV Song Pitch and Feedback Panel – Grand Ballroom (1st Floor) - Songs (from TAXI members only) will be played for Music Supervisors and Music Licensing executives Frank Palazzolo (Music Supervisor), Bob Mair (CEO, Black Toast Music), Mason Cooper (Music Supervisor), Jeff Freundlich (COO, Wild Whirled), and Shannon Quisenberry (Director of Creative, Think Music). Songs only! Music played during this panel will be chosen randomly from a playlist generated from a panel-specific TAXI Listing that ran prior to the Rally. Submissions not played during the panel will be screened on a yes/no basis after the Rally, and Forwards will be sent to all the panelists.</strong> Making Money with Your Old Recordings – Grand Ballroom (1st Floor) - If you’ve got original recordings from the 1930s to the early 1990s, do not miss this panel! Jeff Freundlich’s company gets more Vintage Music placements than any other indie Publisher/Label in the world. Hear examples, learn why Music Supervisors love authentic Vintage Music, and what works best. Drivers Ed Classes and Song, Career and Production Bars See class grid and descriptions for more info. Artist Showcase! with MusicPro Insurance – Concourse Ballroom (Mezzanine Level / 2nd Floor - MusicPro Insurance presents a new music showcase featuring a selection of TAXI Road Rally attendees who responded to their invitation (and a couple of special guests). Performers include: Sadie Duca, Kendyle Paige, Garren, The Cab Driverz and Ali Handal. Jam Room and Open Mic – The Jam Room is in the Concourse Ballroom (2nd floor) and the Open Mic is in the Mezzanine Theater (top of escalator), backline provided. The Open Mic is on a first-come, first-served basis. Members and guests are welcome to jam and perform!

Creating Trailer Instrumentals – Grand Ballroom (1st Floor) - Almost every composer on the planet would love to land a big movie trailer. There’s much more to it than laying down string pads or Taiko drum hits. Trailer maven Randon Purcell will share his techniques for structuring, layering, and sound design, plus tips on the best tools for the job! Driver’s Ed Classes: See class grid and descriptions for more info. 60 Tips in 60 Minutes: Marketing for DIY Musicians – Grand Ballroom (1st Floor) - Join Disc Makers’ CEO, Tony van Veen as he queries this panel of experts on the latest and greatest DIY Musician marketing tools and techniques that deliver real results. 60 great tips in 60 short minutes from Dave Cool (Bandzoogle), Cristina Cano (CDBaby), Bobby Borg (Best-Selling Author), and Sydney Alston (Artist Manager). Lunch – No Eat & Greet Luncheon today. You’re on your own. Enjoy the Daily Grill, which we anticipate will be very busy. Plan accordingly. Writing and Producing Music for Advertising – Grand Ballroom (1st Floor) - Creating songs that work in the highly lucrative field of Music for Advertising is different than what’s generally needed for Film and TV. Join Nate and Kaelie Highfield and Rob Chiarelli of The Usual Suspects as they explain how they create the music that has been licensed in a ton of TV commercials! Understanding Music Library and Publishing Contracts – Grand Ballroom (1st Floor) - Countless members have signed contracts with nearly 100 different Music Libraries through connections made through TAXI. Some members fully understand the contracts they sign, but many don’t! Join Erin Jacobson (Music Attorney), Bob Mair (Music Library CEO), Pedro Costa (Music Library CEO), and Michael Eames (Publisher) as we delve into the concepts and clauses you really, really need to understand before you sign on the dotted line. Drivers Ed Classes and Pop, Urban, Jazz, and EDM Listening Session See class grid and descriptions for more info. The Happy Ending Pitch Panel – Members and Guests can pitch for this! This panel of experts from varied backgrounds will listen to randomly selected songs during this Rally-ending Pitch Panel. Film, TV, Song, and Artist pitches are all fair game during this panel with; Michael Lloyd (100x Platinum Producer, Music Supervisor), Rob Chiarelli (100x Platinum, Grammy-Winning Producer, Mixer), Greg O’Conner (Music Licensing Executive), Bob Mair (Music Licensing Executive), Ron Harris (A&R/Multi-Platinum Producer), and Pedro Costa (Music Licensing Executive). CDs (Songs and Instrumentals) need to go in the drop boxes found between the 2nd and 3rd Grand Ballroom doors between 3:30pm – 5:00pm. 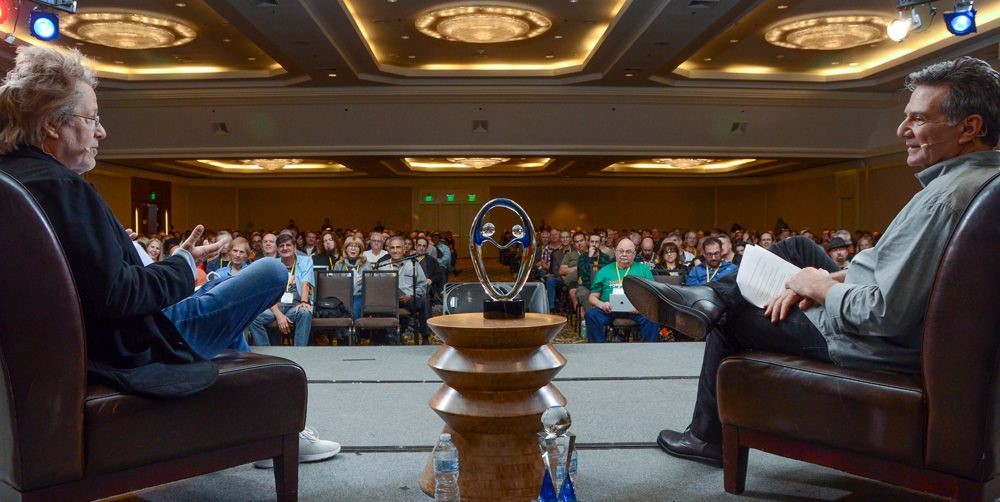 "What a great convention. This was my first year, and I could not get over the fact that it's FREE! I cannot figure out why TAXI’s not charging $400-$500 for something of that caliber." -Kerry Cox, TAXI Member 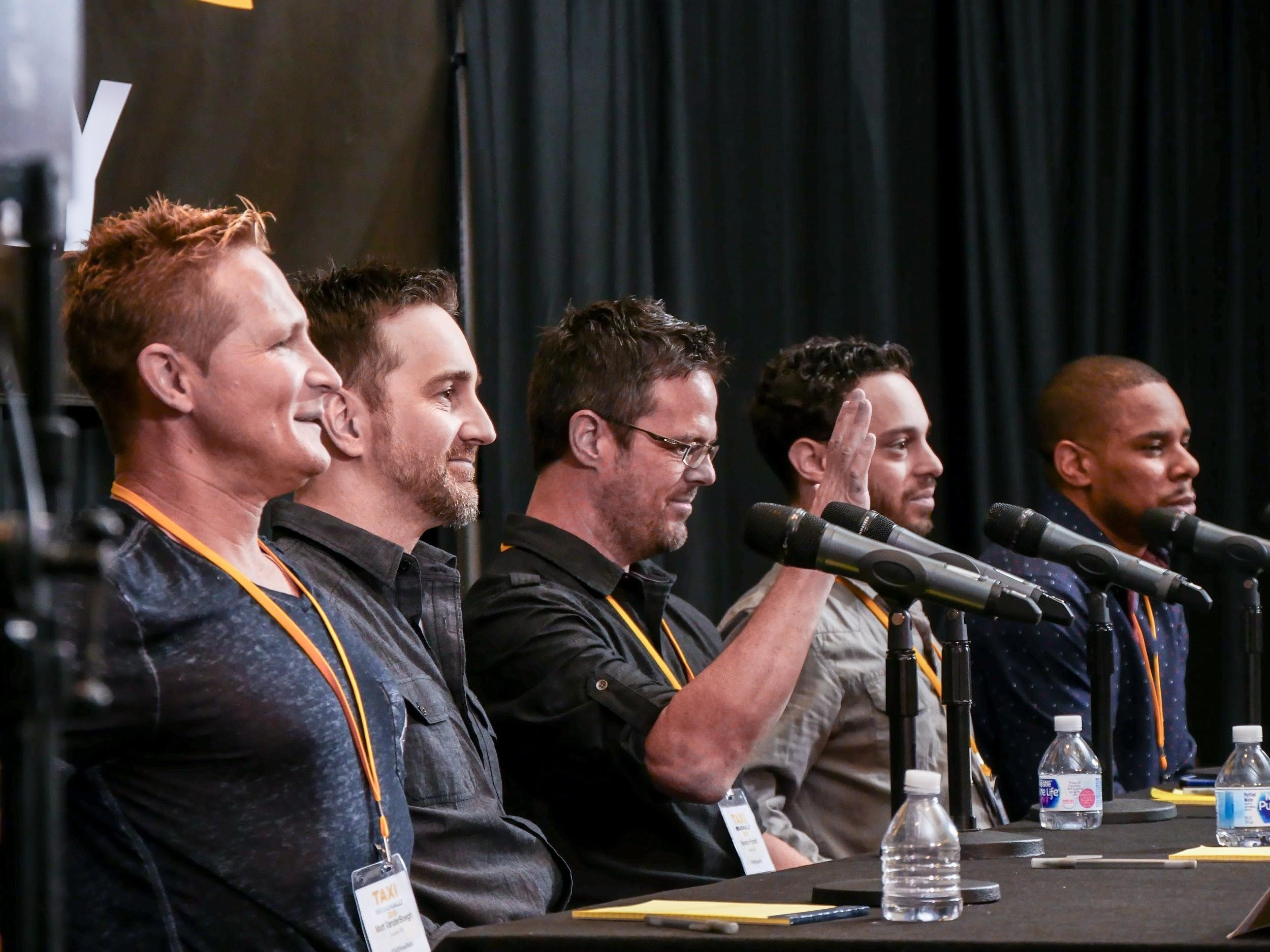 Successful TAXI members Matthew Vander Boegh, Keith LuBrant, Randon Purcell, Marcus Cohen, and Terrell Burt told their fellow members how they find the time to create tons of new music despite having families, jobs, and lots of other 'adult responsibilities.'

"I flew 15 hours from Sao Paulo to LA just for the Rally. And I can tell you: it was one of the best experiences in my life!" -Rogerio Maudonnet, TAXI Member 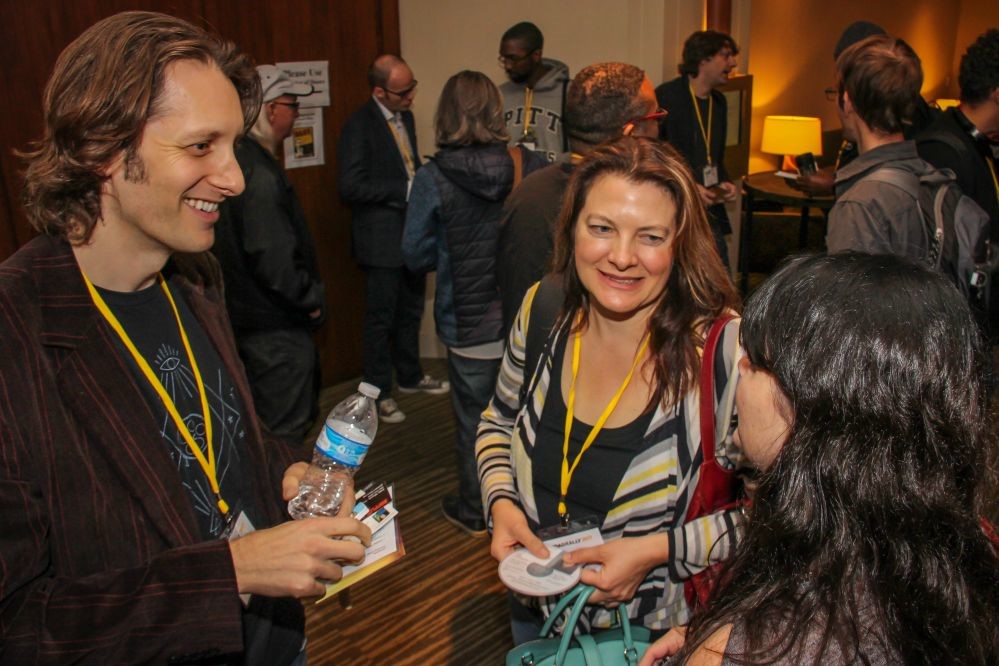 Music Supervisor Russ Howard III was happy to take questions and music from some enthusiastic TAXI members that had just watched him on the Music Supervisor Listening and Feedback panel.

"I’m skeptical of any service that offers to help musicians ‘make it’... so I didn’t know what to expect. ...90% of [the TAXI Road Rally] was the most focused, specific, high-quality advice I’ve ever seen distributed in a seminar format." -Stephen Fortner, Editor, Keyboard Magazine 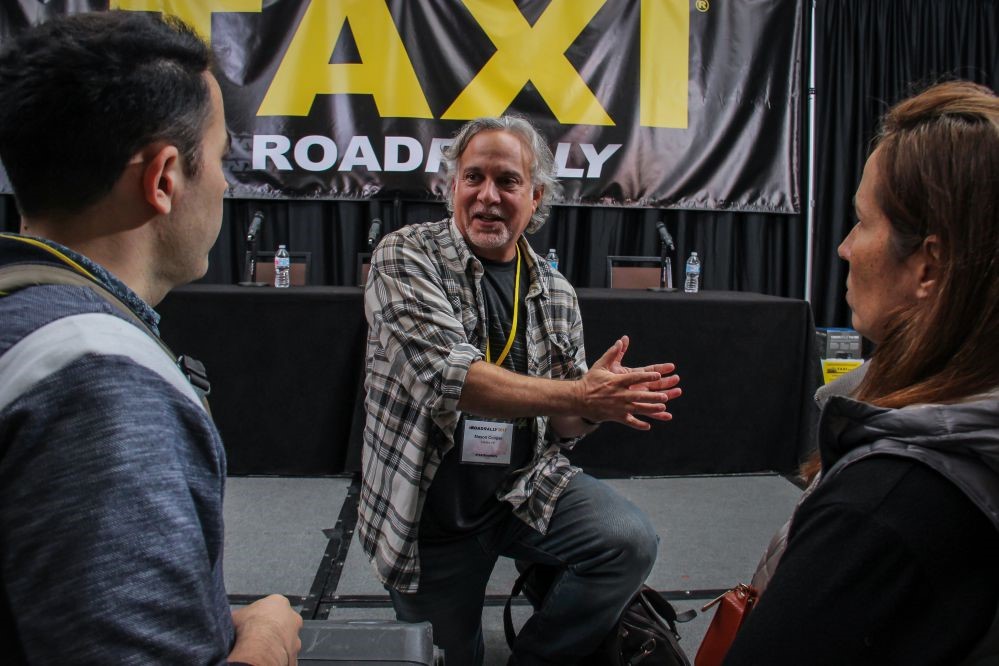 Music Supervisor Mason Cooper was incredibly generous with his time before, during, and even after his appearances on three panels at TAXI’s 21st Road Rally convention.

"I just returned home last night from my first Road Rally. I learned more in three days about the business of music than I have from 45 years in playing bars. It was great, I loved it, and I will be back next year."-Dean Brittain, TAXI Member

Video editor Laurel Ostrander was a huge hit as she showed a packed ballroom how she selects, edits, and lays music into an episode of a reality TV show. People who attended this presentation said it was “life-changing!”

"The TAXI Road Rally is the best conference I have ever been to for musicians looking to become better at songwriting, performing, networking and marketing." -Ariel Hyatt, Social Media Expert 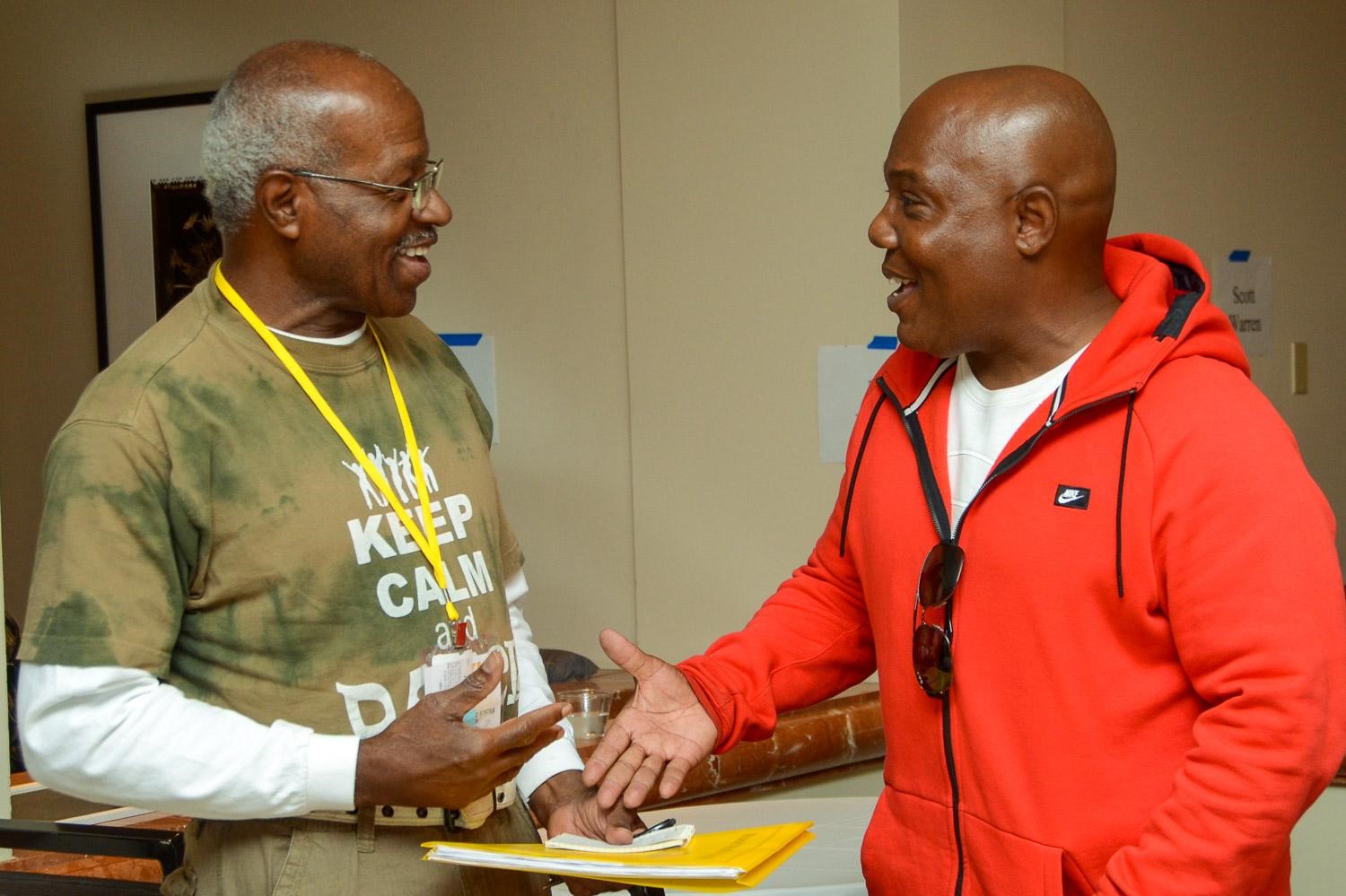 "I would pose this question to anyone who could but didn't come [to the Rally]. Are you serious about music?" -Terry Anthony, TAXI Member 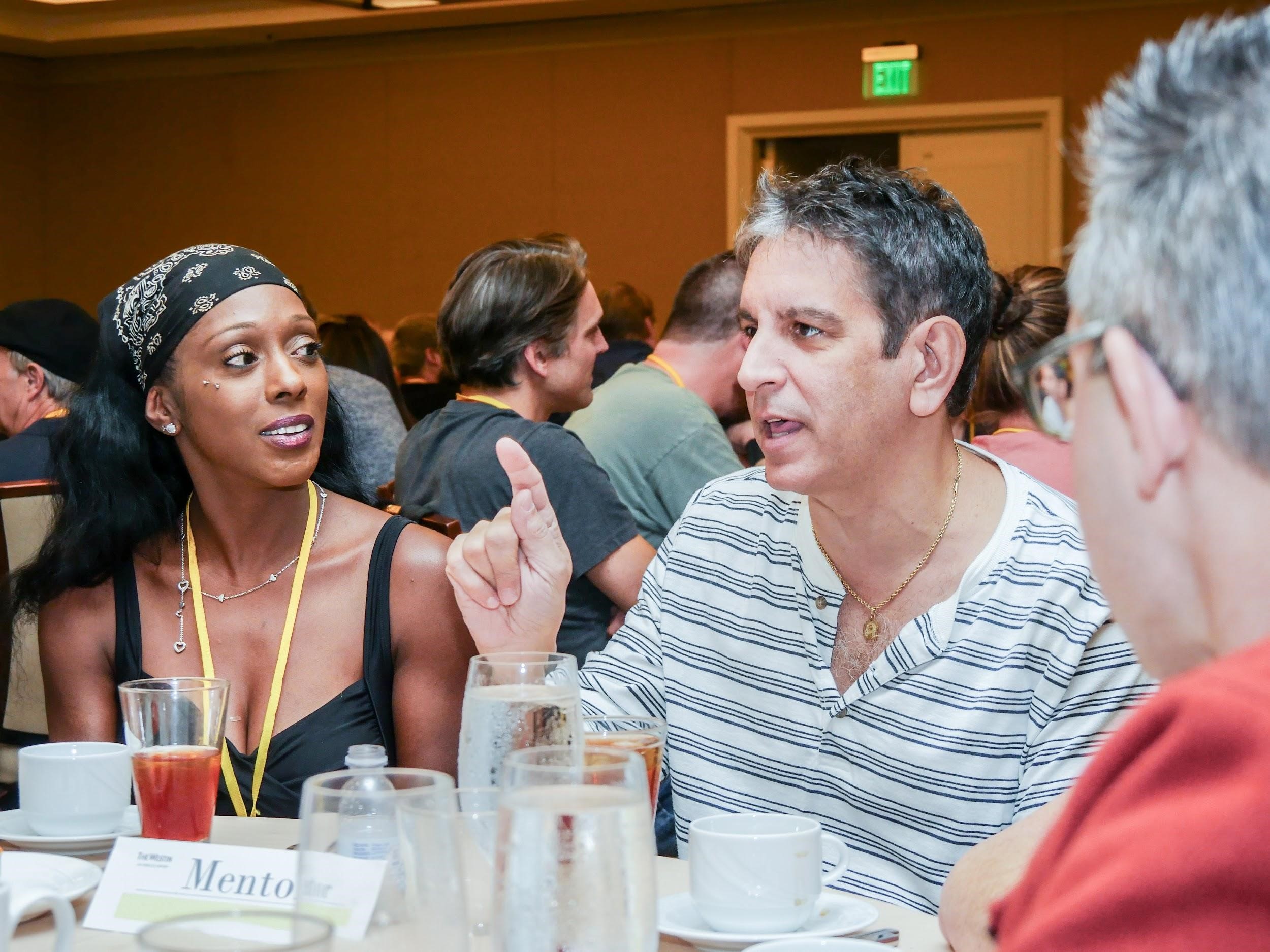 How many times in their lives do you think the folks at this table have had the opportunity to hang out with a Producer/Mixer/Engineer with over 100 Gold and Platinum records and two Grammy Awards to his credit? This sort of things happens every day at the Road Rally!

"Will the Rally be a waste of my time if my music isn't 'ready?' I almost didn't go to the Road Rally this year because I didn't feel ready and professional enough. I decided to go anyway, and I'm so glad I did. Not only did I make some incredible contacts, but also I came home feeling much more professional and knowledgeable about the industry and my own direction as an artist. Thanks again for opening so many doors for me!" -Celia Rose, TAXI Member 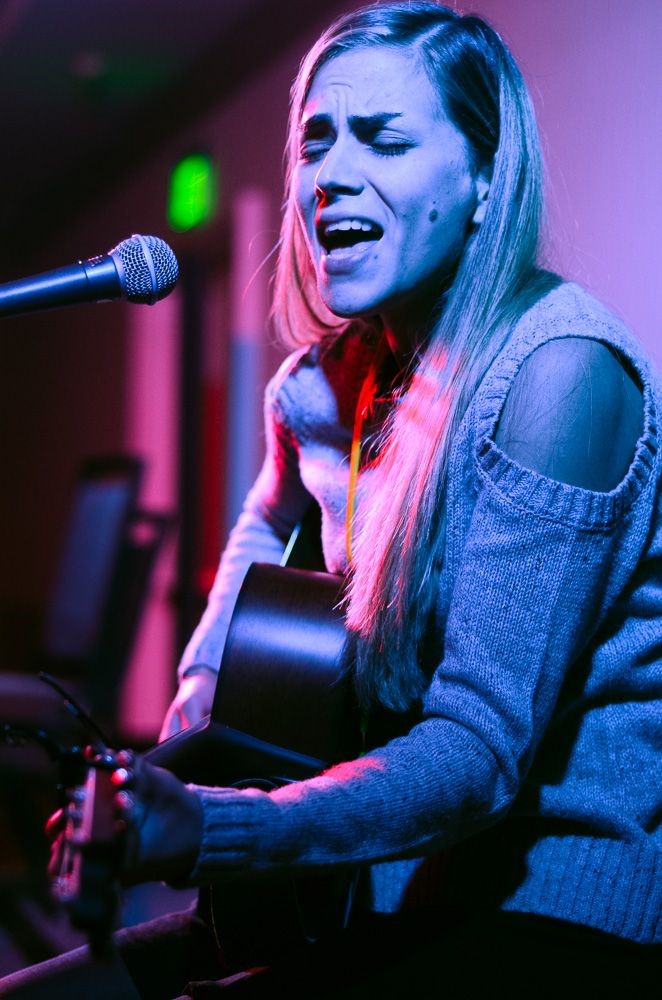 TAXI Member Olivia Bonilla gives a great performance at one of the Open Mics during the Rally.

"Many relationships began for me at the Rally, not only with fellow members, but also with music library owners and publishers who eventually signed my music. I would not have any of the success I have had so far without the TAXI Road Rally. It’s a no brainer in my opinion, if you’re serious about your career." -Robbie Hancock, TAXI Member 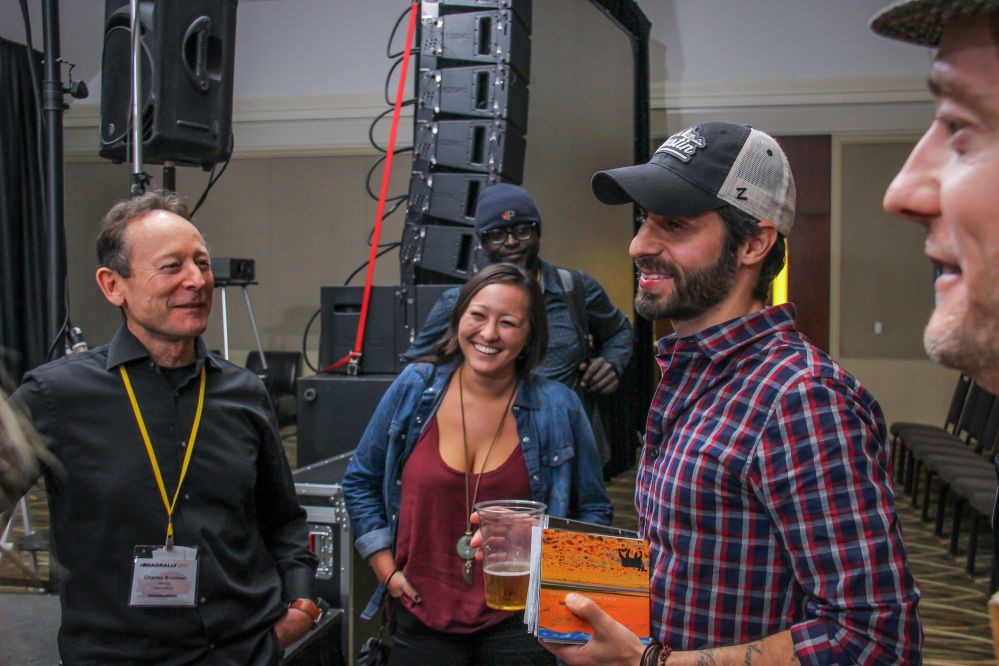 Music Supervisor Frank Palazzolo has a handful of music from TAXI members, a half-full beer, and a big smile on his face when he runs into friends Charles and Julia Brotman after his panel at the Rally.

"You guys are amazing! The advice, instruction and exposure are worth thousands of dollars. And it was free!" -Alex Paul, TAXI Member 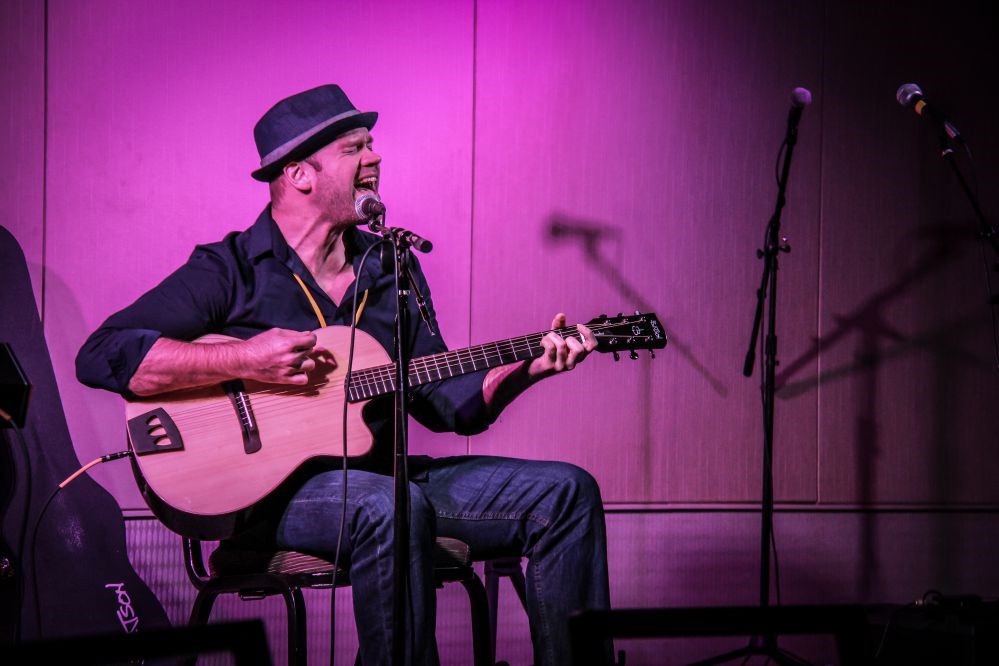 We couldn’t figure out who this member is, but he was clearly giving a great performance while trying out a guitar from Batson during one of the six open mics held during the Road Rally weekend.

"A few months before the Rally, three friends and I were planning to go to a Japanese restaurant. One of them said, “I don’t like Japanese food.” We asked him if he’d ever eaten Japanese food. He said no. In terms of the Rally, I was that guy. And I have since realized that if you want to be successful, you not only have to put your music out there, you have to put yourself out there." -Henry Winckel, TAXI Member