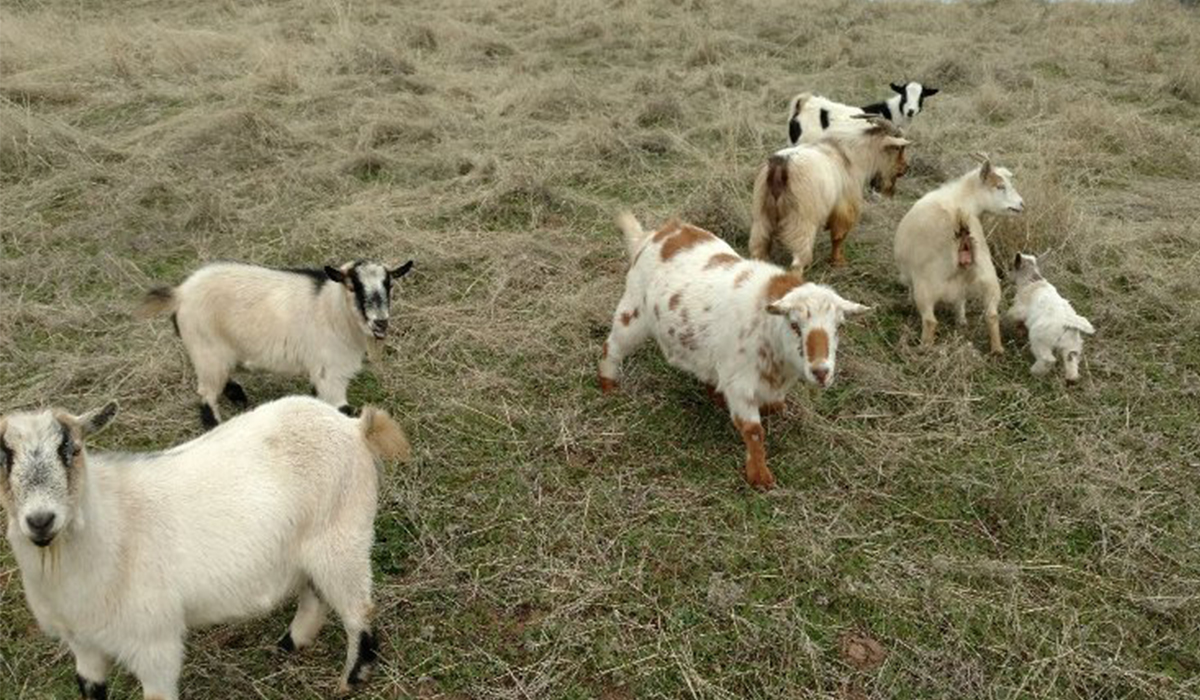 Tell us about your goats! You’re living my dream life in that regard. My goal is to raise goats when I retire – if I ever retire! I love goats!!!
I grew up with horses, sheep, chickens, dogs, and cats, but no goats. I didn’t know anything about them. When I bought my ranch, the previous owners had goats and there was one they just couldn’t catch when they packed up. They asked me if I would take him with the property. I said Yes… his name is Spot. That’s when I started studying goats. Did you know that you can’t have just one by itself or it will go insane? It has to have at least one other “herd” animal in its company, so I decided to get more goats. I was up to six until a week ago when the first birth happened, and now I have seven! (Secret: They love apple slices!)

I’m glad that you still come to our convention, the Road Rally, even though it’s a bit of a trek for you. Can you tell your fellow members who’ve never been to a Rally what they’re missing?
The Rally has consistently been positive for me on many fronts. The classes cover integral elements of being a professional in this industry. The panels give you the “Professional Insider’s Insight” to the industry regarding mixes, licensing contracts, sync placements, and just about anything else you’d want to learn to become successful. I’ve also formed successful collaborations just by meeting and talking with fellow musicians there. If you’re serious about finding your place to become successful in the music business, and have the ability to attend, ATTEND! You won’t ever regret it.

Once you figured out your path, how long did it take you to start getting some traction with your music?
In all honesty, I don’t know my path! My collaborative efforts with fellow TAXI member Dan Luedke were the first pieces to stand out and get recognized, and that happened at a Road Rally listening panel in the ballroom with music library owners in attendance.

"My first placement will forever be my favorite because it involves the sport of golf."

Any good deals or placements you want to tell us about?
My first placement will forever be my favorite because it involves the sport of golf. There’s great competition between the city golf courses in Los Angeles, and I played on the Griffith Park team, which has some well-respected musicians on it. I had mentioned that I was submitting music with TAXI, and though I’d had some music library signings, no placements had come from them yet. Then one day we beat the pants off of our biggest rivals at their course for the city championship.

Sweet!
But the best part is yet to come! As we walked into their clubhouse for celebratory drinks, the TV was tuned to the Golf Channel. The highlights for the upcoming Ryder Cup were playing and the music being used was one of the tracks Dan Luedke and I made! I could not have been happier at that moment. For that I can’t thank you enough!

Man, that’s a great story. Talk about serendipity! Are most of your successes coming from pieces you’ve done solo or with collaborators like Dan Luedke?
Collaborations have led to the most signings for me, by far. When I’m delivered a recording from another musician, for some odd reason, I feel more freedom than I do when I start with my own recording. I think that comes from a life of mostly collaborating in bands. 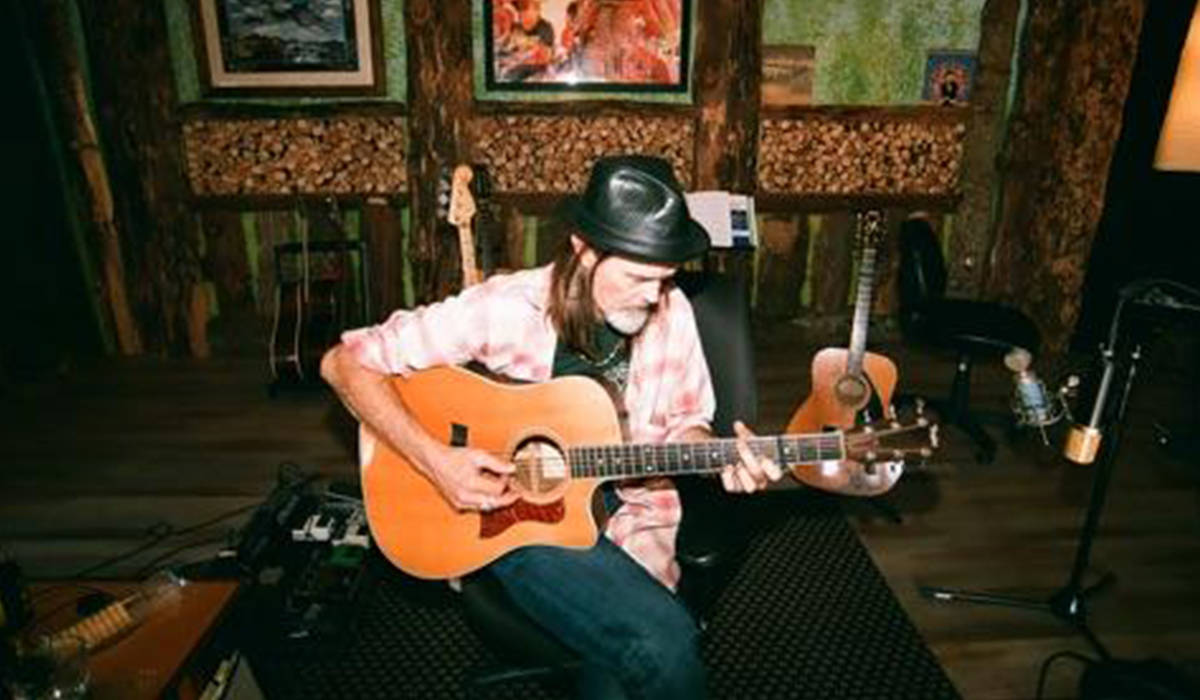 Cass in his studio

That makes sense. How have you met most of your collaborators?
I think I answered earlier in this interview—through the TAXI Forum and the Road Rally. I still collaborate with others outside of TAXI for album projects as well.

Is it hard co-writing without your collaborators being in the same room, or does being alone in the studio afford you more headspace to figure out what you’re going to do?
For me it’s not hard at all. These relationships have been built out of trust. It does take a little bit longer than being in the same room to finish a mix though, but I don’t mind that at all. I’m a turtle in this race…

Tell me about your studio! I remember seeing photos of your home studio in LA when you lived there, and photos of your new studio while you were building it. It’s pretty darn fancy, if I remember correctly. Then again, you’ve got construction chops that must have come in handy!
Where to start? I decided on converting two bedrooms into one recording/mixing room that’s 24’ x 28’. That was a serious project involving a new beam to carry the roof load, opening the exterior walls to add windows for the view and a nice, new door leading out, leveling the floor, adding some corner bass traps, a new bamboo floor, and lots of decoratively placed wood for sound absorption and dispersion. It took a lot of work, but it was worth it. I feel blessed every time I walk in!

What are some of your favorite pieces of gear, microphones, or plugins?
I work in Cubase Pro 8.5, and love the program. I couldn’t do without Rob Chiarelli’s Finalmix line of limiters, as they’re always my final touch on any mix. Ozone’s new Spatial effect is wonderful for widening any mix, so that should get a mention, as well.

"I couldn’t do without Rob Chiarelli’s Finalmix line of limiters, as they’re always my final touch on any mix."

How did it feel the first time you recorded a full track and mixed it in there? Were you happy with your design, the acoustics, and the sound?
Yes! The first thing I tracked was some ukulele, and it sounded sweet to my ears. That confirmed to me that I had done a good thing in building the studio the way I had.

How often do you work on new music?
Almost every day, two to four hours, depending on inspiration and/or ear fatigue.

How do you decide what to work on?
I usually have enough collaborations in the works that I stick to whatever has the closest deadline. From time-to-time I might have a short break where I revisit an old mix or experiment with something new, but that doesn’t last very long.

How many hours does it typically take you to do a new track?
I’m sure longer than it should. I actually don’t keep track of the hours. If I had to guess I would say one to two weeks. I can’t seem to do anything simple.

What’s on your horizon?
The wonderful thing the Internet has given us is the ability to do this from anywhere in the world where you’re connected. I still haven’t decided if this ranch is where I want to stay till the end. Part of me would like to move to Hawaii and build another studio there. I do love it here in the mountains though. Time will tell.

Well, they do have mountains in Hawaii, but you’d have to ship the goats over, and that won’t be cheap! Got any sage advice for people who are thinking about becoming part of the TAXI family?
If you want to do this professionally, be where the best are and learn from them. You’ll find them here with TAXI. 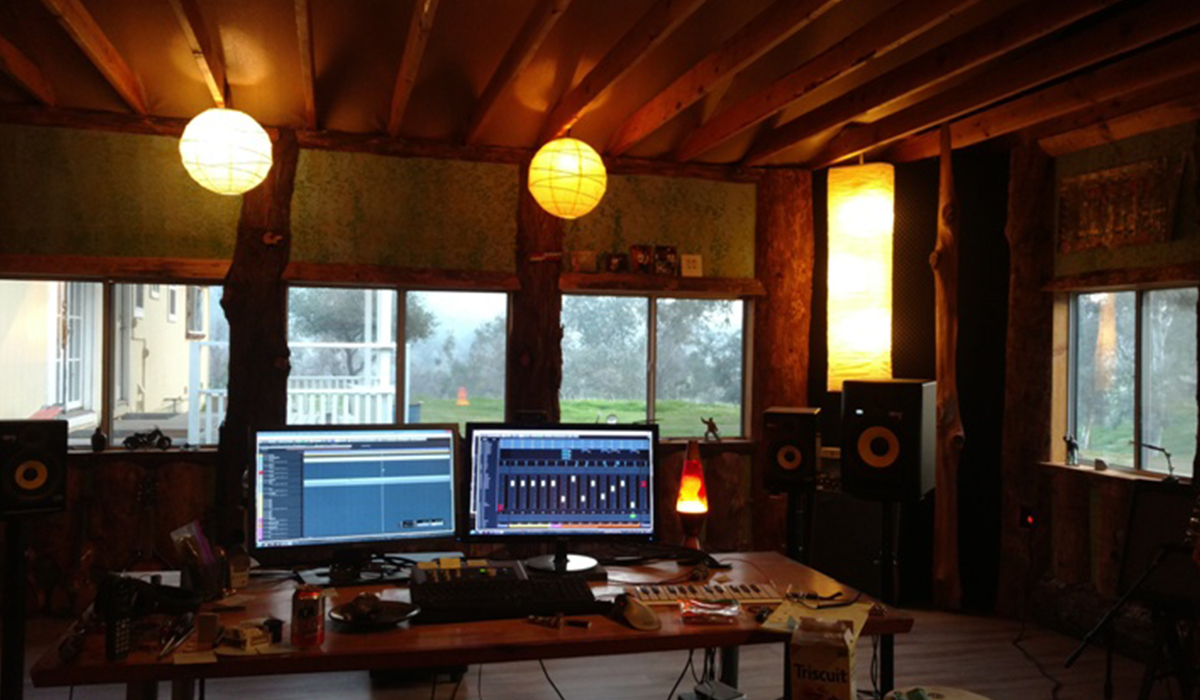 Do you have any advice for first-year TAXI members who are frustrated by not seeing any success, yet?
I don’t know of many professions where you automatically become the boss. You have to learn the tricks of the trade, you have to make friends, and you have to show up when you are called on. There’s a lot you have to learn. Trust me, I can be a slow learner. It took me three years to figure out how to structure an instrumental cue, and that was even when I had help!

Any advice for those of us who want to raise goats?
Don’t ever forget…. Male goats are really stinky unless they’ve been neutered.

Check out some of Cass’s music, here!