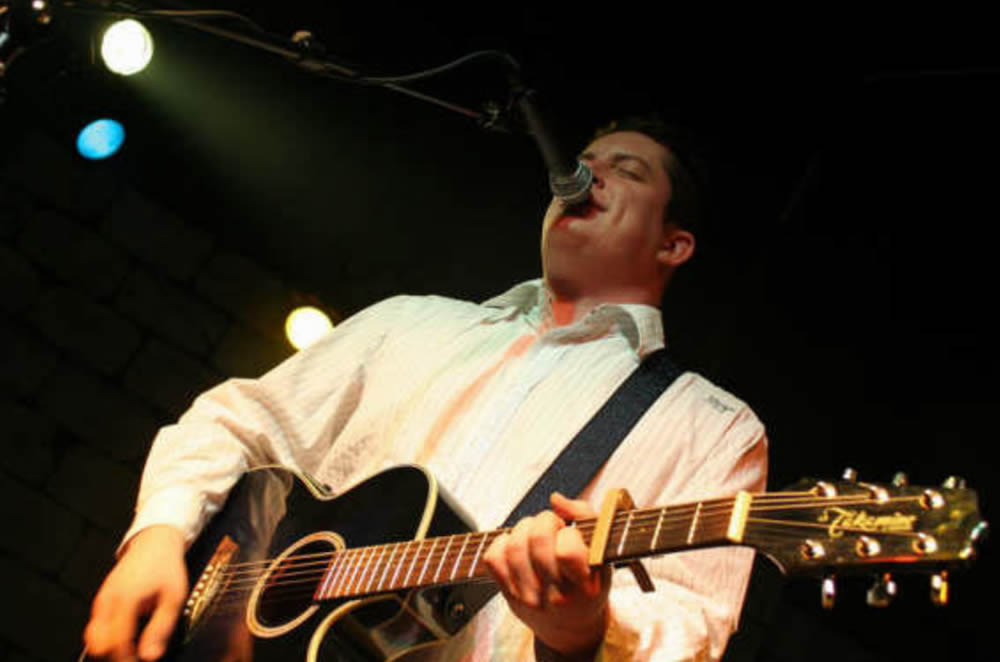 You seem to live in two worlds simultaneously: The performing singer/songwriter and the singer/songwriter who creates music for film and TV placements. Is it hard to do both?
Again I come back to time management. I really love to perform out live but I have to balance that with regular time in the studio to continually be putting out new music each year. I do think that it is hard work, yes, but I’ve never been afraid of that when it is something that I love to do.

Is one discipline harder than the other?
I think they’re just different. Sometimes they both work together well, like after I write a new song and record it in the studio. It’s really nice to be able to go out and perform it and polish it, and perfect the live performance aspect of it at my gigs. The same goes the other way with some songs before I record them. I perfect them in the context of doing them live before I record them.

How many songs do you write in a typical month?
It varies, but when I am full steam ahead I usually can write and record four to six per month at broadcast quality.

Wow, that’s impressive! Do you feel like your songwriting craft keeps getting better over time, and if so, is there something in particular that’s helped propel it forward faster than other things you’ve tried?
In general, having deadlines has been a huge catalyst for me to finish songs and get them out there. So listings, briefs and online songwriting communities like GYAWS have been huge to keep me moving forward and improving my songwriting every day. For the craft of songwriting for film and television, I have to say that Robin Frederick has been monumental in getting me to where I am faster than I could ever do on my own. Her amazing books, TAXI Road Rally presentations, and song feedback on TAXI TV help me to continually improve and flow as a songwriter. I highly endorse all her books that are available on Amazon. Thank you Robin!

"Having deadlines has been a huge catalyst for me to finish songs and get them out there."

Now that you’ve become more experienced as to what works in TV and film music, have you changed anything about your writing process?
Most definitely. Stay out of the way of dialogue. Writing for Film and TV is not about you as the artist. The song isn’t even the star. It is about how you can help that producer or director enhance their scene by using your piece of music. In fact, the easier you can make their job (and more importantly the editor’s job), the more likely they will want to use your music.

Have you changed anything about the way you write lyrics now that you pitch your music for film and TV placements?
For songs, I’ve learned to write universal lyrics about one emotion. It’s also about thinking like a director when I am writing, even if it is not for a specific brief or scene. Having specific common themes to write to really helps; like falling in love, falling out of love, overcoming adversity, and coming home, all really work for a lot of scenes. Adding my own feelings and experience is also essential for me to help better connect with the listener.

How long does it take you to write and record an instrumental cue?
It depends on the genre. I’ve found that’s also the case with songs. Trying to be everything to everyone in every genre is not the smartest approach to get through the industry doors. Honing in on specific genres has really worked for me, especially working with collaborators. I have certainly experimented with many genres to find my niches, and I’ll continue to do so to keep learning. Most of the cues I’m currently doing are tension, solo piano, solo guitar, acoustic roots, and swampy bluegrass. I can compose tension cues the fastest, as they’re usually all done in the box – no live instrumentation. The acoustic and bluegrass stuff takes longer as it’s more organic instrument based. I can finish a tension cue in about three or four hours. It takes a few more hours per cue for the organic based genres.

Are you starting to get any sense of which one is creating a better income stream?
I am just coming into my fifth year as a TAXI member and I am starting to see the income increase this past year from instrumental cues. Prior to that all my income from film and TV placements has come from songs. Looking at the numbers for me right now, things are sitting about 50/50. But things will likely change in the next few years, so then I’ll have a better idea which way things will be leaning for me.

How much of what you write and record is a collaboration VS the material you create on your own?
I would say right now it’s about half are collaborations with a small group of talented writers, artists, and producers that I work with on a regular basis. I am currently starting to work a lot more on my own, but I still feel strongly about the value and power of collaboration with the right people. It’s great when they compliment your skillset as well as filling in the areas that are not necessarily your greatest strengths.

"I would not have any of the success I have had so far without the TAXI Road Rally. It’s a no brainer in my opinion, if you’re serious about your career."

How have you met your collaborators in person?
Yes! Some of the relationships began on the TAXI Forum, some in the chat room during the live TAXI TV broadcasts, but eventually I met all of them at the TAXI Road Rally. Many relationships began for me at the Rally, not only with fellow members, but also with music library owners and publishers who eventually signed my music. The Rally is free with your TAXI membership, and it’s a chance for you network with so many other like-minded people in the business. It’s amazing! I would not have any of the success I have had so far without the TAXI Road Rally. It’s a no brainer in my opinion, if you’re serious about your career.”

Do you collaborate more on songs or instrumentals, or is it about equal?
I would say that it is about equal for me right now.

How many pieces of music do you now have signed to publishers?
About 90, so far.

How many placements have you had?
16.

Do you feel like you’re gaining momentum each year?
Yes, especially over the past year or so. I’ve really started to see more placements come in, more interested publishers, and more connections in general asking for my music. I just have to keep making the music and putting it out there.

Don’t miss Part 3 of this interview in next month’s TAXI Transmitter!

Eight Reasons to Collaborate With a Lyricist
Read the article